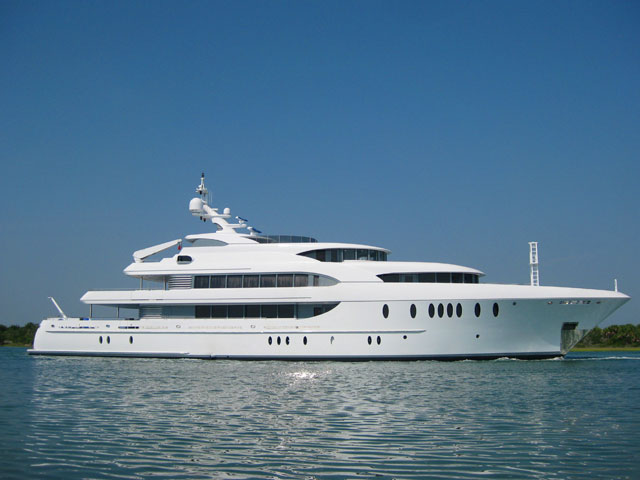 Originally announced as hull number one of the Newcastle 5500 Series, Harbour Island measures 180 feet (55 meters, hence “5500” in her model name). Styling and naval architecture is by Murray & Associates.

Harbour Island’s American owner is quite knowledgeable and specified a few items to emphasize her extra-voluminous spaces. (On a related note, Harbour Island is said to be the largest-volume 180-foot megayacht available for sale, displacing 910 tons. International Yacht Collection holds her central listing.) All toys are stowed in a transom garage, for example, keeping outside spaces solely for relaxing and/or dining. The garage is teak-linked and can become a beach club when the tenders are offloaded. There’s even a handy head just forward. In addition, two of the six staterooms are each master suites: one located forward on the main deck, the other one deck higher. There’s also 12-foot-high vaulted ceiling in the skylounge and an infinity pool aft on the uppermost deck.

While no photos have been released yet of the megayacht’s interior, the design is by Claudette Bonville Associates. Based on renderings that show rich woods and marble inlays, however, it’s sure to be lush.

Harbour Island will be on display at the Fort Lauderdale International Boat Show in October. She’ll start chartering in the Caribbean this winter as well, at a weekly rate of $425,000.