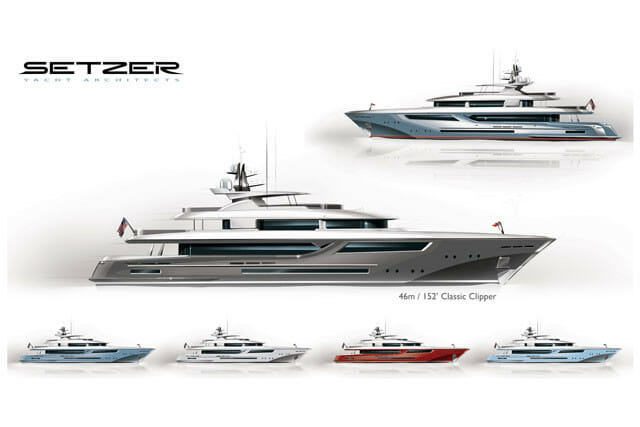 The Setzer Classic Clipper megayachts in the mix above and below are among several new designs from Setzer Yacht Architects. They’re part of the New American Motoryachts series. The series takes time-honored American yacht styles—many of which have been embraced globally—and infuse them with some more contemporary elements. These including bold colors and performance-enhancing systems. The goal of the New American Motoryachts: catch the attention of up-and-coming U.S. owners.

In LOAs ranging from 92 to 151 feet (28 to 46 meters), the New American Motoryacht series was initially conceived by Setzer Yacht Architects’ founder Ward Setzer. Styles like commuters, raised pilothouses, and tridecks, for example, can be found not just stateside, but in harbors around the world. If you take the individual essentials of those styles, you’ll find things like plumb bows, nearly vertical bows, and dramatically flared bows (like the ones on the 151-foot/46-meter Classic Clippers below). Setzer Yacht Architects is freshening up the designs by pairing them with modern must-haves. Today’s buyers want larger ports, helipads, tender hatches, and more. 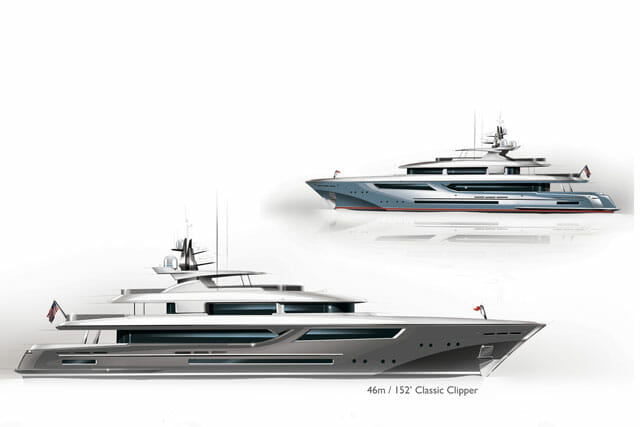 Why, though, does the New American Motoryacht series specifically include tridecks and the other above-mentioned styles, versus others? Setzer Yacht Architects has seen more than 40 of its projects reflecting those looks be built over the last two decades. In that time, Ward Setzer has noted especially how buyers and guests alike have changed their views toward cruising aboard megayachts. Initially, they wanted to escape the business and personal commitments of life on land. Now, however, as much as people still want to get away, they want to stay connected to the office, should the need arise.

We’ll have more on the New American Motoryachts in the coming weeks. They’re part of an even larger new series of yacht and megayacht designs coming from Setzer Yacht Architects. There are 18 in all, which the design firm plans to roll out over the next several months.