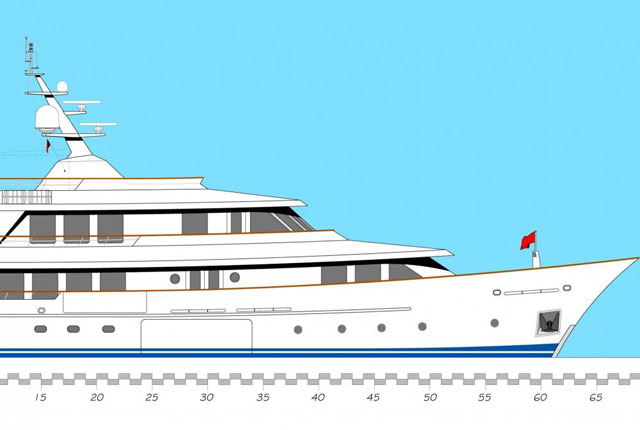 A canoe-stern motoryacht known only by her hull number is the newest contract for Hakvoort. LOA for the steel and aluminum Hakvoort YN250: 125’5” (38.25 meters).

The Dutch shipyard is collaborating with Diana Yacht Design and Felix Buytendijk Yacht Design on the project. The three firms have worked with one another on a number of yachts over the years. Diana Yacht Design is also currently working with Hakvoort on its largest-ever megayacht, Project Zeus.

Hakvoort YN250 is intended for long-range cruising and simplified maintenance. The latter also involves access to technical systems. The owners placed a priority on this in the design brief given to Diana Yacht Design. Performance-wise, twin Caterpillar engines should permit the displacement-hulled megayacht to cruise at 11 knots and top out at 13 knots. Hakvoort YN250 will carry just shy of 12,000 gallons (45,000 liters) of fuel, too.

Nine people in the owners’ party and seven crewmembers will be accommodated aboard. The general arrangement is pretty traditional. Hakvoort YN250 will have a main-deck master suite, for example. It should make the most of the 26’3” (8-meter) beam. Upper- and main-deck saloons will be at the disposal of all guests, with the main-deck relaxation area open to the dining area. Three guest staterooms will be below decks, as will the crew’s quarters. The latter will have quick access to stowage and the above-mentioned technical areas, too, another key element for the owners. Hakvoort YN250’s captain gets a cabin abaft the wheelhouse. Specifics on the overall decor haven’t been revealed.

Hakvoort YN250 will, of course, have a handful of alfresco areas as well. Sunning, grilling, soaking in a hot tub, and dining will all take place outside. Watertoys will include a Laser sailboat, which can be boarded from a fold-down platform amidships at the waterline. Swimmers will also appreciate that platform.