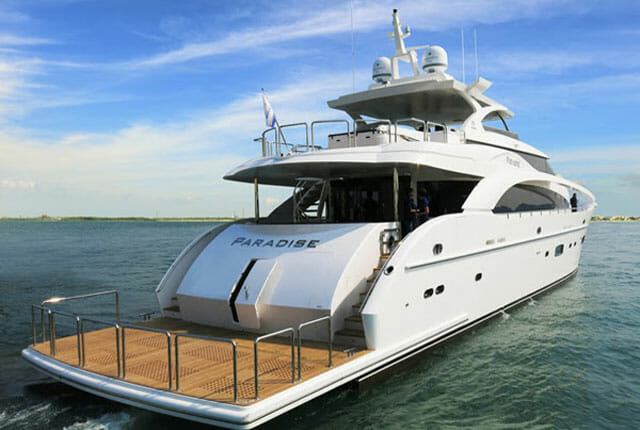 By the end of the month, the Australia-based owner of Paradise should be enjoying his version of paradise. The yacht is the third Horizon RP110, and the largest Horizon in the country thus far.

Another difference: the hi-low swim platform (at top). The owner of Paradise wanted it to extend out as shown, to 12’2” (about 3.72 meters). It’s also capable of holding a custom tender weighing 3,300 pounds. Neither of the two previous Horizon RP110s tote a tender back here, not have an extendable swim platform. 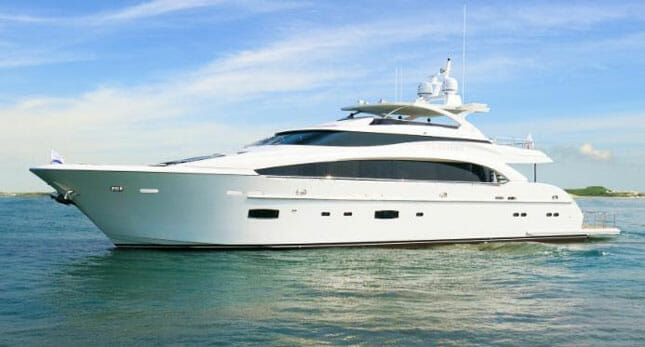 All the Horizon RP110s, including Paradise, do have a beach club. It’s an intimate space, given the crew’s quarters (for six) aft as well. The beach club is revealed two ways: via the centerline door, or the hydraulically raising transom.

The owner of Paradise requested walnut wood with high-gloss ebony accents throughout the interior.  (Dark woods are also aboard Carnival Liberty 3, while light ones characterize Andrea VI.) He also requested various relaxation areas able to accommodate big groups. Besides the total of 10 people who can sleep aboard, Paradise can host 20 people for meals on the flying bridge. They can further take a peek over the captain’s shoulders at the helm station up here as he brings the RP110 into port.