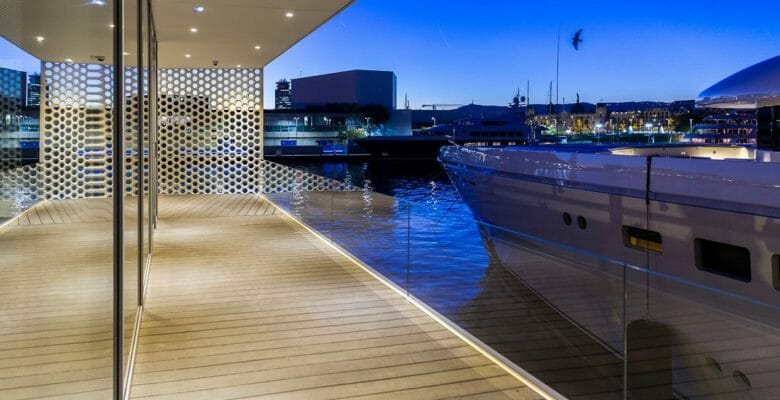 UPDATE, JUNE 23, 2015: Marina Port Vell has received official approval to accommodate megayachts to 623 feet (190 meters). The berth is side-to along Spanish Quay at the marina. Thus far no private yachts measure quite that large. However, Marina Port Vell’s management team believes it is simply a matter of time.

With 148 berths for megayachts to nearly 400 feet (120 meters), Marina Port Vell has been drawing more owners, captains, and crew to the city of Barcelona. Another important milestone has been reached, that being the opening of The Gallery. The building houses a spa, a crew lounge and games room, a gym, a sundeck, and a business center with private meeting rooms. The business center includes marine companies like Elite Crew International, Pantaenius Group, Linen Lintea, and BWA Yachting. There’s further a concierge desk to handle travel and entertainment requests, among other things. In related news, the first OneOcean Club, a private members club with a restaurant, is also open at Marina Port Vell, in a separate building.

This photo gallery gives you an overview of The Gallery, plus Marina Port Vell itself. It’s interesting to note that The Gallery was designed to mimic a yacht hull’s curving shape.

There’s more to come this year at Marina Port Vell. For example, Fisherman’s Quay will be finished, with seven berths for megayachts to 262 feet (80 meters).