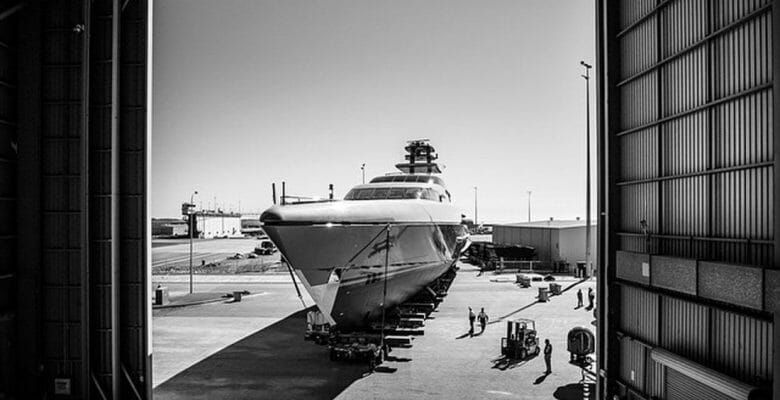 UPDATE, July 14, 2015: Silver Fast proved her fuel-efficient prowess on her maiden voyage. She covered 3,200 nautical miles between Perth, Australia (Silver Yachts’ headquarters) and Sri Lanka. According to Burgess, which holds her newly announced central sales agency, Silver Fast averaged 17 knots while burning 105.7 gph (400 lph). That figure is impressive for her speed. Burgess further puts her top end at 27 knots in ideal conditions, with a 20- to 22-knot cruise. Asking price for Silver Fast: €79.5 million (about $87.55 million at press time).

Read on for the original article, and check out the photo gallery.

The newest sleek superyacht from Silver Yachts slipped into the water in late March. She’s Silver Fast, and if her anticipated top speed approaching 29 knots is any indication, she’ll cut a more impressive silhouette underway.

With an LOA of 252’6” (77 meters) and beam of 32’8” (10 meters), Silver Fast is further quite svelte. That’s similar to her predecessors, which include Dragonfly (ex-Silver Zwei), all designed by Espen Øino. Her narrow hull aids in the all-aluminum megayacht’s intended performance. Cruise speed should be 25 knots. If she hits 29 knots during sea trials, then Silver Fast will become the world’s largest and fastest aluminum yacht under conventional power. That power comes from twin MTU 16V 4000 M90s.

Silver Yachts also intended Silver Fast to be fuel-efficient. The Australian yard says she can make the crossing from Australia to Europe with just one fuel stop in 21 days. Silver Yachts also says she should cross the Atlantic at 22 knots (under ideal conditions, of course). Best range should come at 14 knots: 6,000 nautical miles, a longer distance than other yachts at that speed. Silver Fast should further be capable of 4,500 nautical miles at 18 knots, a distance requiring slower speeds of other craft. Relative to her size, she has a shallow draft, 8’5″ (2.6 meters), bringing a variety of skinny-water destinations into reach.

Silver Fast is not solely about performance. Built on spec, and for sale via the yard, she has the luxe touches buyers expect. The owners will have nearly an entire deck to themselves, including an alfresco area and saloon. Four guest staterooms (one double, one twin, and two twins with pullmans) are below decks, while three VIPs are on the main deck. Everyone has use of a beach club/wellness room, featuring a sauna, steam room, and massage area. Tender launching should prove to be a spectacle, thanks to gullwing doors. Speaking of spectacles, the “magic mirror” TV on the bar’s facing surely will keep guests in rapt attention while they soak in the hot tub. (The hot tub, by the way, has a glass front.)

Another interesting twist on layout and design: the main aft deck aboard Silver Fast. Rather than the usual seating area here, she has an alfresco theater, complete with a large plasma screen. Just aft of this is a so-called winter garden. It’s glass-enclosed and air-conditioned for all-year, all-weather use, with enough seating for 20 to enjoy dinner together.

Silver Fast, carrying a crew of 17 plus the captain, should be completed in May.

Enjoy this photo gallery of Silver Fast, with images from Silver Yachts’ new Instagram page. Click on any of the images to launch a slideshow.