You are here: Home / Yachts / Motoryachts / Megayacht Maryah Makes Her Way Around the Med 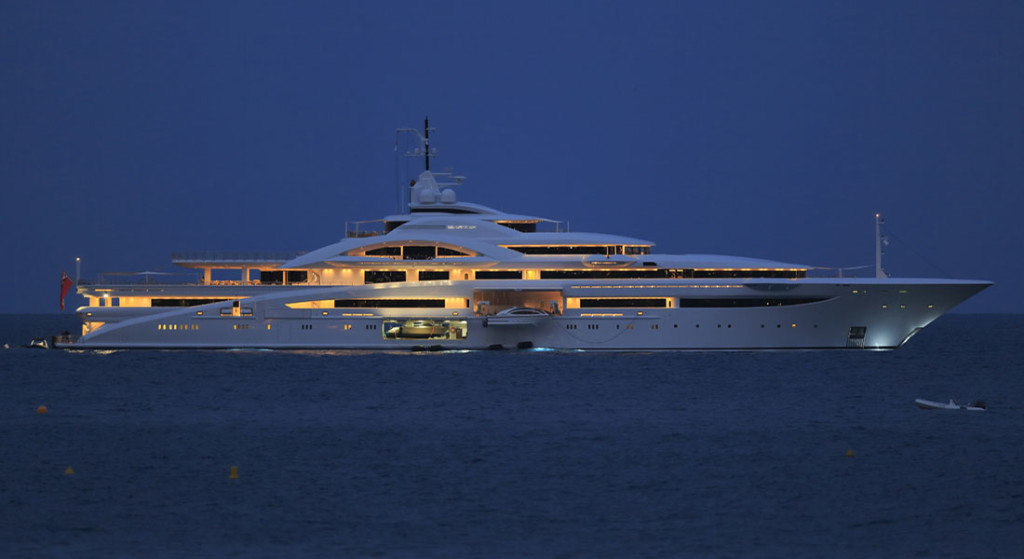 Yacht enthusiasts in the Med are getting better looks at one of the newest super-size superyachts. She’s Maryah, coming in at 400 feet (122 meters), according to her AIS data. She’s been active along the South of France in recent weeks. While some of her details have been highly guarded, one thing is clear: Maryah is among the 20 largest private yachts in the world.

The history behind Maryah is pretty interesting. She was referred to as Project 120 while in build, due to the originally planned 120-meter (394-foot) LOA. But, she wasn’t a new build while at Elefisis Shipyard in Greece the past several years. Rather, she was a rebuild of a research vessel constructed in 1991 in Poland. Back then, she was known as Dalmorgeologiya, measuring 365’8” (111.5 meters). For 10 years starting in 1995, she carried the name Fortune. It appears she spent a good deal of time unused toward the end of that period. She was then sold again and towed to a Greek shipyard in 1995, hardly moving for another decade. In 2007, known as Czar, the vessel was relocated to yet another Greek shipyard. The photo below shows her condition that year, plus a hint of her strictly-business styling.

Sometime between 2007 and 2009, the concept for Maryah took shape. H2 Yacht Design was approached in the latter year by an existing client to restyle Czar as a yacht. The design team was also asked to create the interior, compliant with SOLAS rules for 54 passengers.

Neither illustrations nor images of the interior of Maryah have been made public. However, H2 Yacht Design was able to reveal some of her stand-out features. They include areas for work and play day and night, like a business center, computer room, cinema, games room, and a nightclub. There’s also a sushi bar aboard, plus a spa. In terms of styling, Maryah bears little evidence of her original lines. The client wanted a clean, crisp look, with no detractions. Even the lifeboats are tucked away.

Maryah was expected for delivery in late 2014, but appears to have been handed over earlier this year. She’s called on a number of ports so far, ranging from Montenegro to Monaco. She was in Cannes earlier this month for the famed film festival, for example. She then anchored off Monaco during the Monaco Grand Prix.