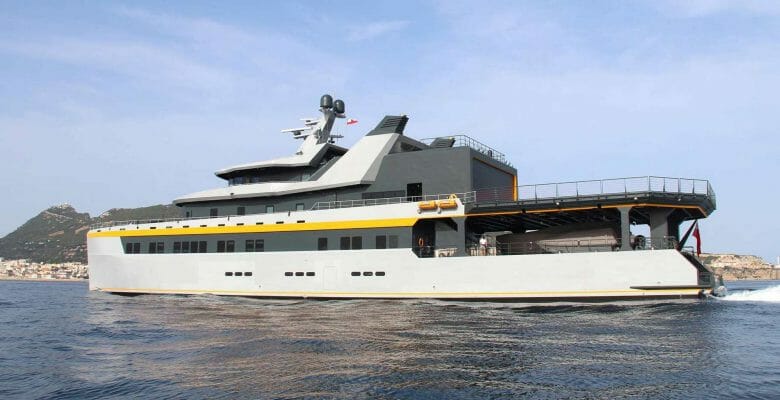 Her name may evoke images of cosmic wonders, but the super cat Nebula is every bit a seagoing sensation for her owner. She’s the third large catamaran support yacht from an experienced shipyard, too.

Nebula saw construction at Spain-based Astilleros Armón, with Yacht Naval Architects providing naval architecture and following her progress for two and a half years. As for the shipyard, it has staked its reputation on high-speed ferries, tugs, ocean-survey and research vessels, plus many more commercial craft. Some are monohulls, while others are multihulls. Additionally, in recent years, Astilleros Armón has expanded into shadow vessels, specifically superyacht catamarans. In fact, it delivered two in the past two years, Wayfinder (in 2021) and Hodor (in 2020).

The 220-foot (67-meter) Nebula, featuring all-aluminum construction, departed Spain for her maiden voyage earlier this month. Her first port of call was Poole in England. A run over to Gibraltar this week precedes her spending upcoming time in the Med. As a support yacht, however, she’s capable of far more than Med cruising. She should see a range of 5,000 nautical miles at 12½ knots. Note, too, that a certified helipad and dedicated heli hangar aboard Nebula point towards serious voyaging and location scouting. Of course, abundant tender stowage is aboard as well, including on the main aft deck, beneath the helipad.

The project-management team has not yet revealed a look into the interior of the yacht. However, Kirsten Schwalgien Design, based in Barcelona, collaborated with the owner for this, and styling, too. The studio has penned the looks of other support craft, as well as traditional megayachts and tenders.