Home / Yachts / Sailing Yachts / Bill Tripp on Oceanco Aquijo: “Why So Big? Why Not? We’re All Mortal” 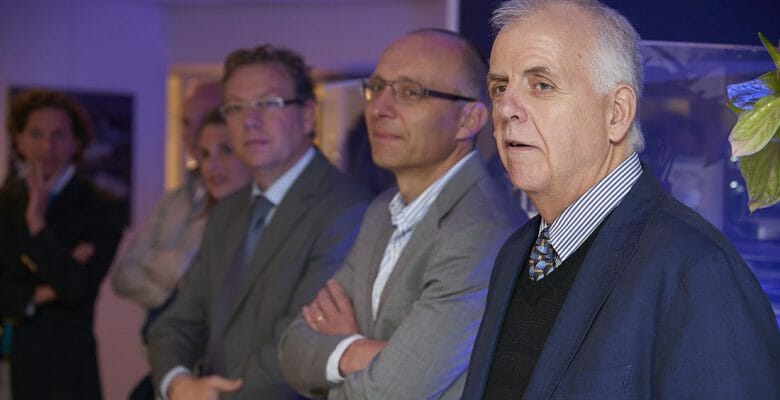 “We’ve been learning rapidly,” says Dirk de Jong, ‎second from right above, the project development and R&D manager at Oceanco. He’s referring to sailing-superyacht construction, new territory for the shipyard. He gives credit to Bill Tripp of Tripp Design, the studio behind Oceanco’s 279-foot Aquijo, a.k.a. Y711. This “spectacular” superyacht ketch, whose mast height above the waterline is 295 feet, launched a few weeks ago.

With a total sail area around 43,000 square feet, Aquijo will be spectacular indeed. Tripp (pictured, far right) anticipates her handily seeing 15 to 20 knots on a regular basis. Since her mast exceeds Panamax height, the yacht will round Cape Horn in her globe-trotting adventures, too.

At a press meeting at Oceanco’s shipyard in early June, Tripp went into detail about the project. Known as one of the best performance-oriented designers, he admits to having some initial concerns. “When we were first contacted to do an 85-meter, we thought, ‘Well, how fast will it be? This will be one of the biggest boats ever.’” When the 344-foot Y712, a square-rigged sailing superyacht, moved into the build shed next to her, however, “my comfort level went way up. Because, I looked over and said, ‘Honey, they shrank our boat,’” he jokes.

“At 1,500 gross tons, it’s still a very big sailboat,” he avers. Which raises a question many people ask: Why do owners of super-size superyachts commission projects so large? As for the owner of Aquijo, who’ll have a “rumble seat,” as Tripp calls it, far forward outside on the main deck, Tripp has one of the best arguments we’ve ever heard: “Why not? We’re all mortal.”

Here, Tripp discusses the overall design of Aquijo. He mentions the client’s comfort level with sailing around the world, plus her rig, which he considers a “sketch” rather than a ketch:

We’ll have even more on Aquijo, a history-making project for Oceanco, following her completion. Final outfitting is going on now.