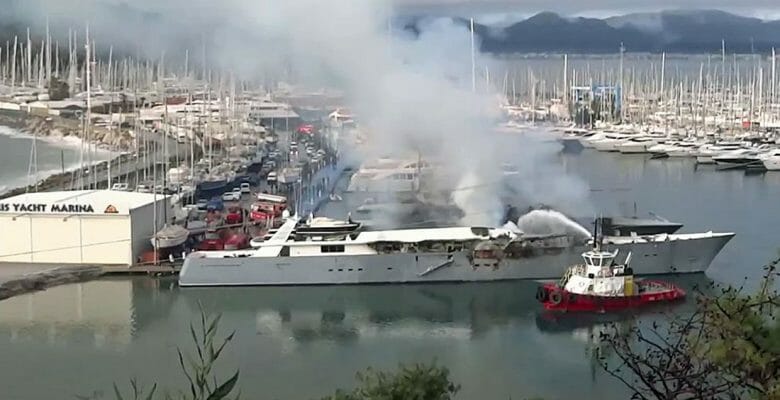 UPDATE, MARCH 18, 2016: The owners of the megayacht Barbie, which was destroyed in the fire, have been awarded $20 million by their insurance company in recognition of a total loss. The investigation into the cause of the fire is ongoing.

A fire overnight in a popular marina in Marmaris, Turkey appears to have destroyed at least two of the megayachts berthed there.

According to local reports, the fire occurred at Marmaris Yacht Marina. The facility is among the largest in the Eastern Med. It has 750 slips plus an additional 1,000 spaces on the hard. A broker who had megayachts based there posted the video below on YouTube. The broker states that the fire started around 2 a.m. aboard the 239’5” (73-meter) The One. About half an hour later, the broker adds, the 171-foot (52-meter) Barbie, in an adjacent slip, was on fire as well.

We’ve reached out to Marmaris Yacht Marina to confirm these statements. As of press time, we have not received a reply.

Unfortunately weather conditions may be partially to blame for the spread of the fire. The broker states that the winds at Marmaris Yacht Marina were about 35 knots at the time.

The video includes brief footage early in the morning, showing the flames aboard The One. It also includes footage taken hours later, when The One and an adjacent yacht, Barbie, are seen heavily damaged. The photo at the top of this page is a screenshot from the video. It shows a fireboat continuing to attend to The One.

Marmaris is, of course, a popular port for megayachts and a wide variety of water-based activities in general. It attracts a number of cruisers during the peak summer periods, plus is used as a winter base. Marmaris Yacht Marina offers a variety of maintenance services in addition to dockage.