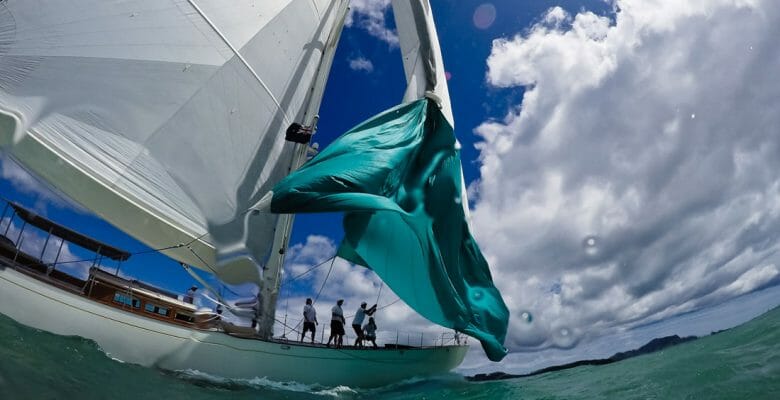 Tawera trounced the competition in her division on the second day of the New Zealand Millennium Cup. Considering this was her first time competing, more seasoned sailors’ egos may still be bruising.

The one bright spot for them, though, was the weather. The high winds and threatening skies of day one turned sunny for day two. A 26-nautical-mile course was set, and off they went. Sea life seemed happy to race alongside some of them. Dolphins accompanied a few yachts. Hammerhead sharks were spotted streaking along, too.

Day two of the New Zealand Millennium Cup included the same sites as day one, including Ninepin Island. Unlike day one, however, winds dropped upon the approach to the island. Allegro, Steinlager II, and Antaeus all suffered sagging sails. Silvertip’s crew steered well wide and sidestepped the situation. Janice of Wyoming “hair-pinned around with a resounding gasp,” in the words of the race communications committee.

Winds continued to challenge throughout the day. They changed from westerlies to nor’easterlies at one point. The Pacific Division and Millennium Cup Division competitors surely put their tacticians to the test.

The tactician and rest of the crew aboard Tawera, in the Millennium Cup Division, were thrilled with their gamesmanship in crossing the finish line first. Silvertip, a longtime competitor and repeat winner of the New Zealand Millennium Cup, had to settle for second. They were followed by Kealoha, Janice of Wyoming, and Shamoun. In fact, Janice of Wyoming gained on Shamoun with just seconds to go. The Pacific Division yachts, in order of finish, were Steinlager II, Allegro, and Antaeus.

If you’re keeping count, four of the five yachts are tied for first place so far. What will day three hold? Stay tuned; check out some of the day two action in the meantime below.