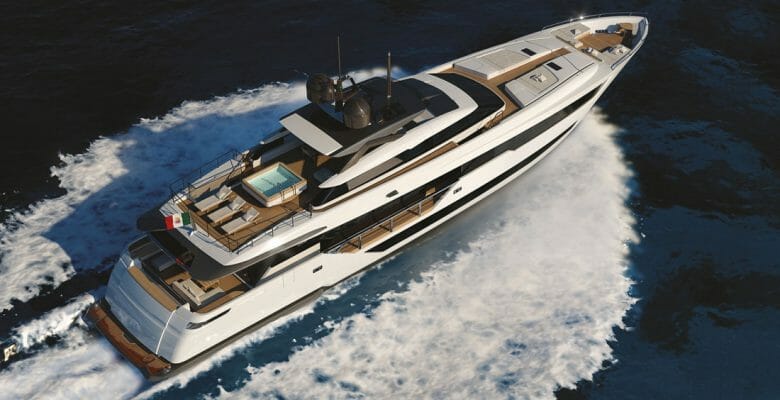 UPDATE, JULY 18, 2017: Hull number one of the Custom Line 120 series now has an owner. Launch is set before the end of this summer. She will make her formal debut at the upcoming Fort Lauderdale International Boat Show this fall.

The Ferretti Group isn’t just adding a bigger megayacht to its Custom Line brand. It’s collaborating with a designer new to the series. The Custom Line 120 will be the biggest planing yacht from the yard when she debuts next year. And, she bears styling and interior design by Francesco Paszkowski Design.

The design studio often incorporates stylistic cues from other industries. They include the automotive sector and residential architecture. Therefore, you will see curves and carved-out sections, soft and sporty lines, too. Yet, the Custom Line 120 does not radically depart from the looks of her smaller sisters. Francesco Paszkowski says he wanted to make the profile appear sleeker. He does so by using one long port to each side on both the main deck and lower deck. The main-deck ports are full height, too.

Paszkowski takes a creative approach to simple, overlooked features, too. Megayachts usually have sliding glass doors separating the main saloon from the aft deck. The Custom Line 120 instead has doors with a “peculiar shape and opening system,” he says. They open up, from the deck to the overhead. The goal is to make one big indoor-outdoor area, with the centerpiece being a double-sided settee.

Hull number one of the Custom Line 120 debuts next summer. Buyers wishing to commission their own can personalize the spaces, in keeping with the builder’s tradition. The design studio and its longtime partner, Margherita Casprini, created a full-beam (25-foot) master suite forward on the main deck. Four guest staterooms plus four cabins for the captain and crew all sit below decks.

Paszkowski paid particular attention to alfresco areas, too. The foredeck seating/lounging area especially has extra deck space devoted to it. Dining, relaxing in a hot tub, and more await on the upper deck.

Preliminary performance figures show the Custom Line 120 having good turns of speed. With twin MTU 16V 2000 M94s, she should top out at 25 knots and cruise at 22 knots. At her economical 11-knot speed, she should see a 1,060-nautical-mile range. While this is not the long range of other motoryachts, it isn’t especially relevant to most Custom Line customers. They probably enjoy coastal cruising and island-hopping most of the time.

Take a sneak peek at hull number one here: