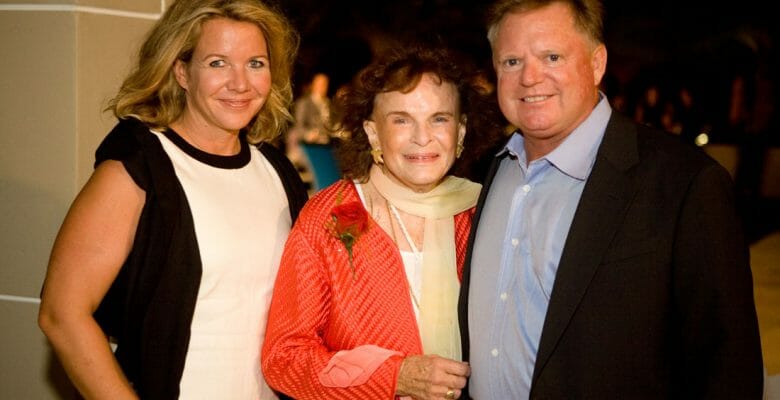 Jane Buffington (center, above), a pioneer in the yachting industry, particularly among women, died on November 29 from heart congestion complications. She was 90 years old.

Born in Annapolis, Buffington enjoyed boating early on. Her family kept a 40-foot Elco at their home, along a creek in Annapolis. Her own first boating purchase years later was a kayak. Buffington enjoyed a life of adventure, too. She moved to China at age 11 when her stepfather, an officer in the U.S. Navy, transferred from Japan. (She later wrote about her time in China in an e-book, Of Rickshaws and Rebellions, available on Amazon.com.) Upon the sinking of the U.S.S. Panay in December 1937, the family moved to Manila. They returned to the United States, settling in Washington, D.C., in 1939.

Buffington attended high school there and enrolled at Stevens College in Columbia, South Carolina—pursuing higher education in an era unheard of for women. While working in D.C., she met Collier Buffington, and the two married in 1944. A lieutenant in the Marine Corps, he served in the Korean War. The couple moved to Medford, Oregon, with their two sons following his return in 1951. There, she was active in local and state politics, plus the Cowbelles, an auxiliary of the Cattlemen’s Association, due to having hundreds of heads of cattle (plus nearly a dozen horses, and a handful of dogs).

With her sons in college in the late 1960s, Buffington returned to school herself. She earned a bachelor’s degree in English literature from Southern Oregon University in 1973. Further noteworthy, between 1966 and 1974, she was a regular guest host of “Women’s World,” a popular local TV talk show. Among her interviewees: the famed photographer Ansel Adams, whom she became friends with and frequently visited until his death in 1984.

Buffington and her husband divorced in 1974. After moving to Southern California, she landed a job that would shape the rest of her career, and indeed the yachting industry. She became an apprentice at Fraser Yachts’ San Diego office in 1975. (In those days, Fraser Yachts was solely West Coast-based.) Buffington then moved to Fort Lauderdale that same year to open the first Florida-based Fraser Yachts’ office. The office was far different than what it is today: two small rooms on the second floor of a pink building near Pier 66. Two decades later—when Fraser Yachts occupied far larger space in town—the company credited her as being “the catalyst for Fraser’s incredible growth.”

Among the sales that spurred that growth: Annaliesse, in 1999. Buffington brokered the construction on behalf of the late Andreas Liveras. Buffington had become a yacht broker for the firm within a decade of joining the staff. Furthermore, she achieved not just one, but two significant first sales as a broker: two Feadships. She later earned a partnership in Fraser Yachts, working alongside founder David Fraser. And, she was instrumental in the sale of the firm to a group of Italian investors in 2003.

Buffington celebrated her 30th anniversary with Fraser Yachts in 2005, on her 79th birthday. She retired as a yacht broker that same day. She continued to work with the company, though, for the next two years. Also in 2005, the International Superyacht Society (ISS) presented her with its inaugural President’s Award. A founding member of the organization, Buffington was a driving force behind the ISS’s annual education programs and Distinguished Crew Award. She additionally introduced the idea of standardized crew recruiting, training, and hiring through a school supported by ISS. Both in her work with ISS and with Fraser, she championed not just young professionals, but also women in the industry.

In the years that followed, Buffington remained close with many people in the yachting industry. (The photo above is of her with Pamela Jones, an accomplished photographer, at Jones’ Art Basel exhibition in Miami a few years ago. Jones fondly remembers,“She drove down to Miami for it. Such a great woman!”) She also split time between Fort Lauderdale and a summer home in Oregon. She returned to the Rogue Valley in Oregon full time in 2016 and bought an apartment with a view of her old ranch at the base of Mt. Baldy.

Buffington is survived by her sons Collier and Spencer, plus three grandchildren. In lieu of flowers, her family has requested donations in her name to the International SeaKeepers Society.