Home / Yachts / Motoryachts / Vertige on the Verge of Delivery 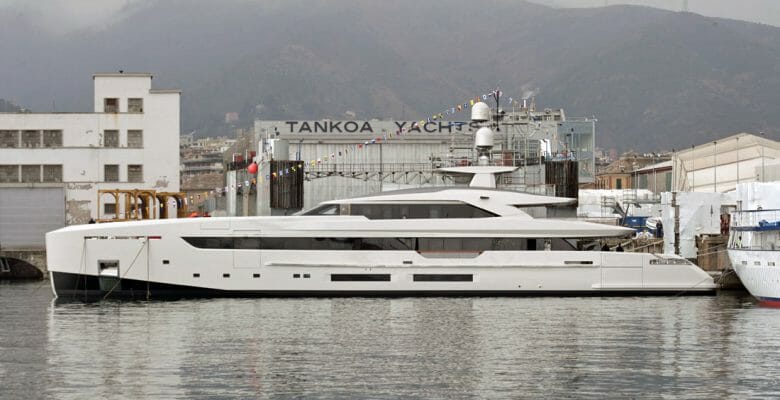 Two years after her contract signing, Vertige is floating on her lines in Italy. The second project built by Tankoa Yachts, she’ll be in her owner’s hands by April.

Commissioned by a French owner, the all-aluminum megayacht prioritizes guests’ ability to access all relaxation areas without disturbing crew activity. Simultaneously, crewmembers’ needs to do their jobs are preserved. Furthermore, the owner wanted the 164-foot (49.9-meter) Vertige to remain beneath 500 gross tons yet still offer the benefits of more voluminous boats.

Francesco Paszkowski Design, with Margherita Casprini, outfitted the six staterooms and gathering areas with warm tones. The rendering below gives a good idea of what to expect once all paneling and furnishings are in place. You can also expect areas like the main-deck master bath and the guest baths to have a good deal of stonework.

As for those guest accommodations, Vertige has two suites unusually situated on the main deck. One, of course, is the owner’s, with fold-down balconies. His suite spans the 30’8” (9.4-meter) beam. The other main-deck accommodation is a VIP, the first of three aboard. The other two VIPs accompany two more traditional guest staterooms below decks.

All guests will get to use a cinema and beach club/gym while cruising aboard Vertige. TVs in the upper-deck saloon (which also has a bar) and out on the sundeck can show sports or movies. Balconies folding down on the main aft deck make that area more inviting. For more activity on the water, the yacht will stow a 23-foot (7-meter) tender in a garage.

The owner’s representative, Albert McIlroy, admits that the contract stipulated a tight timetable, making for “a challenging experience” for all. However, he comments Tankoa Yachts for “a Teutonic approach that often leaves me speechless for an Italian builder.”