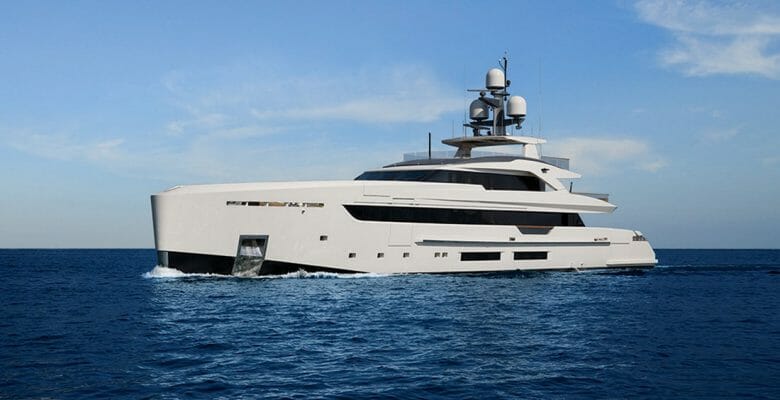 Sea trials typically confirm contract expectations. In the case of Vertige, they proved surprising, in a good way. She exceeded her contractual requirements. What’s more, Vertige did so in sloppy seas.

Started on paper as the Tankoa S501, and signed in 2015, the full-displacement, all-aluminum megayacht measures 164 feet (49.99 meters). The intention was to create a yacht of this LOA that felt more voluminous despite being beneath 500 gross tons. So, too, would she have amenities of larger yachts. For performance, the owner required a half-load maximum speed of 16 knots. (Power comes from twin MTUs.)

The first sea trials were set for calm conditions, including just 5 knots of wind. Situations like this are customary for shipyards around the world. However, Mother Nature seemed to have other plans. According to Tankoa, Vertige went out in a cross sea (a choppy sea in which the waves run in different directions). Wave heights exceeded three feet (one meter). In addition, winds gusted to 30 knots. Even so, Vertige reportedly topped out at 16.5 knots, under 60-percent load. Furthermore, the yard general manager reports that sound levels were less than contractually required. While Tankoa does not say what the requirements were, it does say that the levels were less than 50 in the master suite and VIP stateroom.

Both of those staterooms are on the main deck, unusual design features aboard Vertige. Another unusual design: The saloon furnishings face aft. But, some features are more traditional, like the two fold-down balconies in the master. Rounding out the rest of the accommodations, two VIPs and two standard guest staterooms are below deck. Other amenities include a cinema-like TV lounge on the upper deck, along with a bar. A nearly 10-foot-long (three-meter-long) balcony folds out from the aft main deck, too. And, floor-to-ceiling windows like the saloon. Francesco Paszkowski and Margherita Casprini are giving the client a “modern but warm” atmosphere.

The shipyard still expects to deliver Vertige this month.