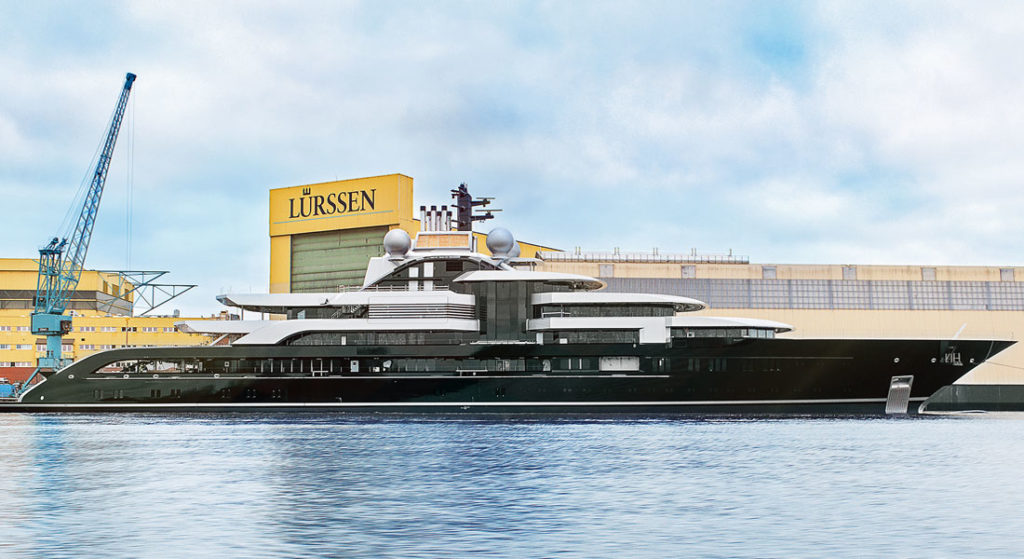 APRIL 3, 2017: Lürssen has confirmed Thunder as the code name, following the official launch earlier today. The shipyard further confirms Espen Øino as the stylist. A few more facts from the shipyard:

Interior outfitting is the next step. The overall design is traditional in nature. 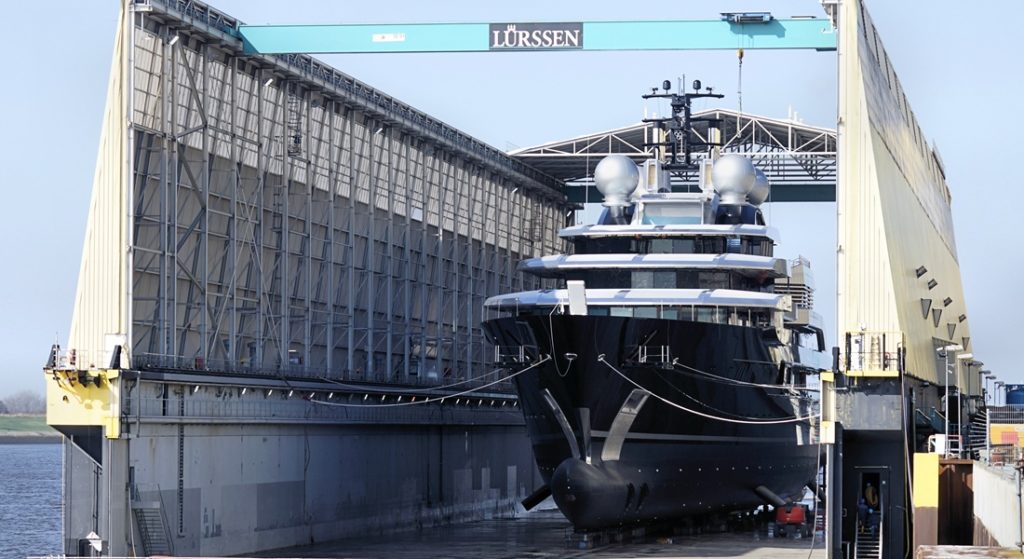 Activity over the weekend in Bremen, Germany has the yachting community buzzing. The megayacht many believe to be the code-named Project Thunder became visible at Lürssen.

Yacht watchers first spied this project, as mostly bare metal, back in November 2015. That’s when she switched from one shed to another at the shipyard. The sightings this weekend reveal a painted hull and topsides. She appears advanced enough that she’s ready for launch.

While the photos here don’t show off her styling, photographers on site over the weekend report some similarities to the work of Espen Øino. The estimated LOA varies, however. Some sources believe she’s close to 426’5” (130 meters). Others believe she’s as large as 442’9” (135 meters).

And, therein lies one of the reasons we caution that this could be Project Thunder. The exact LOA remains unconfirmed. In addition, Lürssen has not commented on the build, dating back before last year’s appearance, due to confidentiality agreements. Furthermore, one usually reliable source thinks that Project Thunder has a delivery date set for next year.

Despite the variety of unanswered questions, we believe the LOA of nearly 443 feet is close, if not the actual measurement. When the bare structure appeared in 2015, Quantum Blue happened to be close by. Even at a healthy 341 feet (104 meters), Quantum Blue was definitely smaller in comparison.

Regardless of Project Thunder’s definitive length, Lürssen launches set to occur over the next two to three years have one thing in common. All but one will exceed 328 feet (100 meters). The one that won’t isn’t far off, though. Code named Project Sasha, she’s about 279 feet (85 meters). At the other end of the spectrum, the largest (that we know of, at least) is Project Redwood. She’s a Nuvolari-Lenard design of 456 feet (139 meters). Delivery is set for 2019.