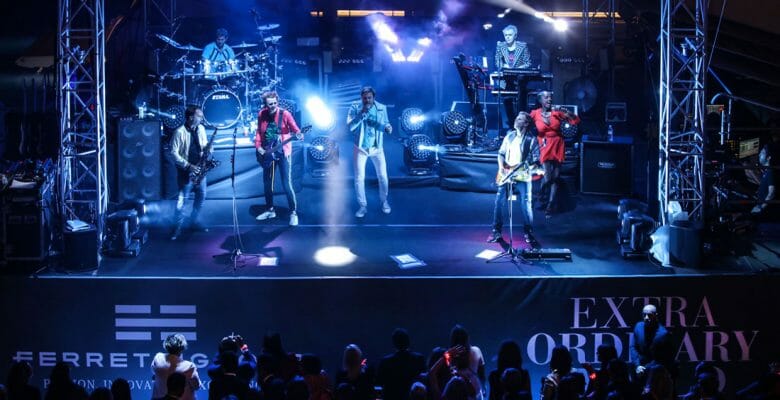 Customers of the Ferretti Group got the first chance to see four new megayacht models in Monaco over the weekend. This, ahead of those same yachts making their global premieres on the boat-show circuit. Simultaneously, the yachts set the backdrop for an exclusive concert given by the British band Duran Duran.

While the Group had 25 yacht and megayacht models for customers to see, the new projects were the Ferretti 780, Ferretti 920, Riva 100 Corsaro, and the redesigned Custom Line Navetta 33. “Small” Ferretti owners are the target for the Ferretti 780. She lets them ease into megayacht territory, plus offers flexible layouts for eight people. The Ferretti 920 offers different layouts, too, for eight to 10 people. The 100 Corsaro, meanwhile, marks the return of flying-bridge designs for Riva. For several years, Riva had focused on sporty coupe yachts. As for the new-look Navetta 33, it’s proving to be quite popular. The first five hulls already sold.

The gathering was part of the annual Ferretti Group Private Preview. Held at the Monaco Yacht Club, the event attracted more than 500 guests. They gathered along the yacht club’s terraces as well as Quai Louis II, directly in front of the yacht-shaped building. As soon as Duran Duran arrived, though, tables and terraces were abandoned, for the makeshift dance floor. (Under normal conditions, the dance floor is a dinghy dock.) From the opening song “Notorious,” the hits came one after the other. Among them: “Hungry Like the Wolf,” “A View to a Kill,” and “Wild Boys.”

Equally noteworthy is how Duran Duran arrived. It was via yacht, naturally. The four members of Duran Duran stepped off deck and straight into “Notorious.” They wrapped things up with a yacht theme, too, playing “Rio.” You might remember the video featured the band singing on a sailing yacht. Then, Duran Duran stepped back aboard a yacht and into the Monaco night, the Ferretti Group yachts at the dock sounding their horns as a send-off.