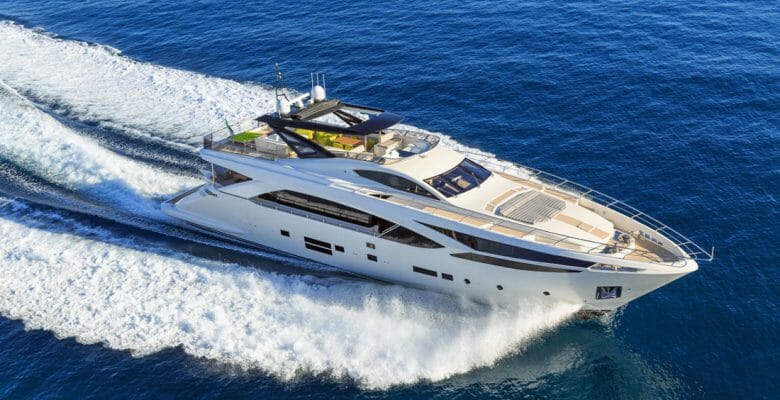 She may be “just” hull number three in the Amer Cento series. But, the hull that recently arrived at Amer Yachts’ facilities (below) is number 14 overall for the megayacht builder. Significantly, she’s an Amer Cento Quad, the quadruple-engine series that made history last year.

Measuring 97 feet (29.6 meters), the Amer Cento Quad became the largest yacht equipped with Volvo Penta’s IPS propulsion system. (Amer Yachts has broken that record, too, with its 110.) As we’ve explained over the years, this system consumes about 30 percent less fuel and emits 30 percent fewer emissions than traditional shaft propulsion. In addition, it creates about 50 percent less noise, and boosts range by about 40 percent. Furthermore, IPS makes a yacht more maneuverable. IPS has made significant inroads into small and large power yachts, and is gradually adapting for megayacht applications. Amer Yachts decided to build its first Amer Cento Quad on spec, premiering her at last year’s boat shows. As a result, the shipyard says, the design piqued significant among buyers. 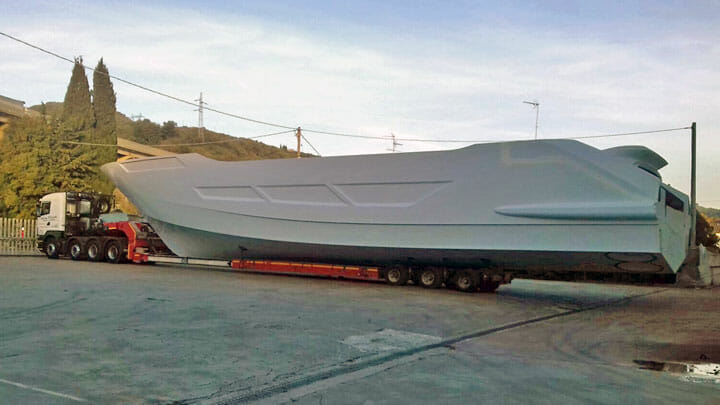 The performance figures play a big role in that interest. The Amer Cento Quad features four IPS 1050 units. This, the yard says, permits cruising at about 25 knots and topping out around 28 knots. At 22 knots see most efficient range, 482 nautical miles, burning about 109 gph (411 lph). This is the equivalent of about 5 gallons (18.7 liters) per nautical mile, according to the yard’s data.

Due to the smaller footprint of the IPS system, the Amer Cento Quad gains space for guest areas and stowage. Four guest staterooms are below decks, while the master is on the main deck. It spans the beam of 23 feet (7 meters), too. As for decor, the owner of the project, launching next summer, requested an Art Deco style.

For a sense of what he can expect, check out the video above of the previous Amer Cento Quad. You can see the four-engine installation process. Note while you’re seeing them being craned up and maneuvered inside that they really are far smaller than typical diesel engines.

On a related note, next year Amer Yachts celebrates 45 years in business. The builder’s roots are in technical services for other shipyards.