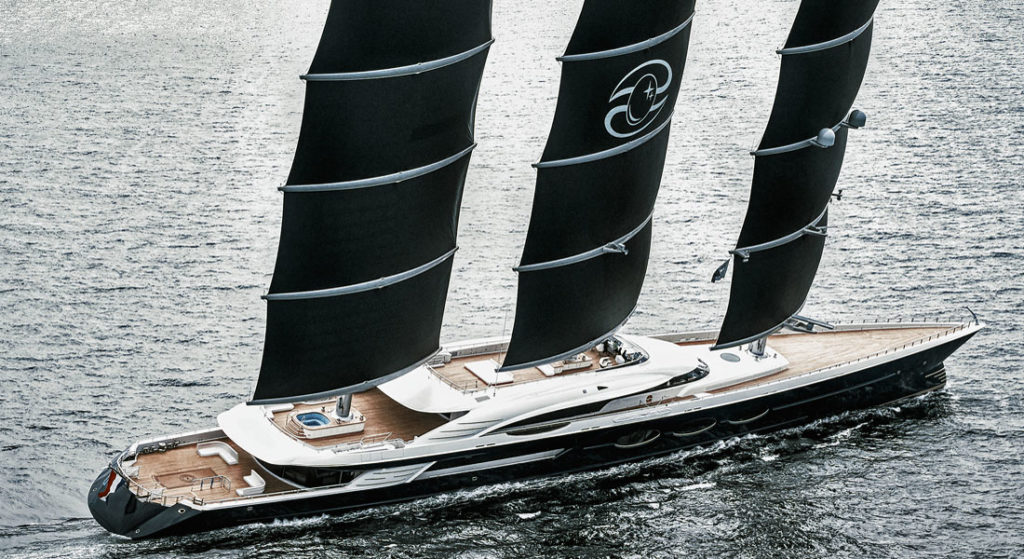 By now yacht watchers worldwide have gotten more than a few glimpses of Black Pearl as she neared completion by Oceanco. The 350-footer (106.7-meter) is the world’s largest sailing superyacht. More significant from a technical standpoint, she’s the world’s largest DynaRig-equipped sailing yacht. Regardless of your knowledge of rigging and related equipment, though, you can appreciate one simple fact. Black Pearl treated fellow vessels to a terrific light show before departing on delivery in the wee hours of this morning.

Thankfully, Dutch Yachting, the ardent fans of all things nautical made in The Netherlands, captured the light show in this video below. While the nighttime conditions prevent fully appreciating the effect against Black Pearl’s black-painted steel hull, you can still enjoy the playful nature of the display.

As for Black Pearl ranking as the world’s largest sailing yacht, a little explanation is in order. While Sailing Yacht A is indeed larger, at 468’5” (142.81 meters), she is not a sailing yacht. She’s a sail-assisted yacht, meaning she primarily relies on engine power. Furthermore, some rankings of the world’s largest yachts include a sailing vessel named Sea Cloud. The 359-foot (109.5-meter) Sea Cloud serves as a cruise ship.

As mentioned above, the DynaRig is key to Black Pearl. First seen in yachting on Maltese Falcon, the concept dates back to the 1960s. Each of the masts is freestanding, with fixed yards. For sails adjustment, the full masts rotate in place. No gaps exist between the sails when deployed, either. The effect is akin to single, long sails. In turn, efficiency when sailing increases.

Specific to Black Pearl, each mast rises nearly 230 feet (70 meters). Each is made of carbon fiber composite, too, designed by Dykstra Naval Architects. Sail setting and furling occurs at the push of a button. Oceanco and the naval-architecture team say setting takes just seven minutes, for 31,215 square feet (2,900 square meters) of sails.

Black Pearl is efficient in other ways, too. She has hybrid propulsion and waste-heat recovery, thanks to Oceanco collaborating with BMT Nigel Gee. Waste-heat recovery means warmth given off by machinery does not escape unused. (For instance, hot water can result from the recovery.) The hybrid system regenerates when her sails are doing the work as well. She should cut quite the profile sailing up to an astonishing 30 knots.

While we don’t have interior images, the design comes from a triumvirate of studios: Ken Freivokh Design, Nuvolari-Lenard, and Villate Design. The former two studios also gave Black Pearl her styling.