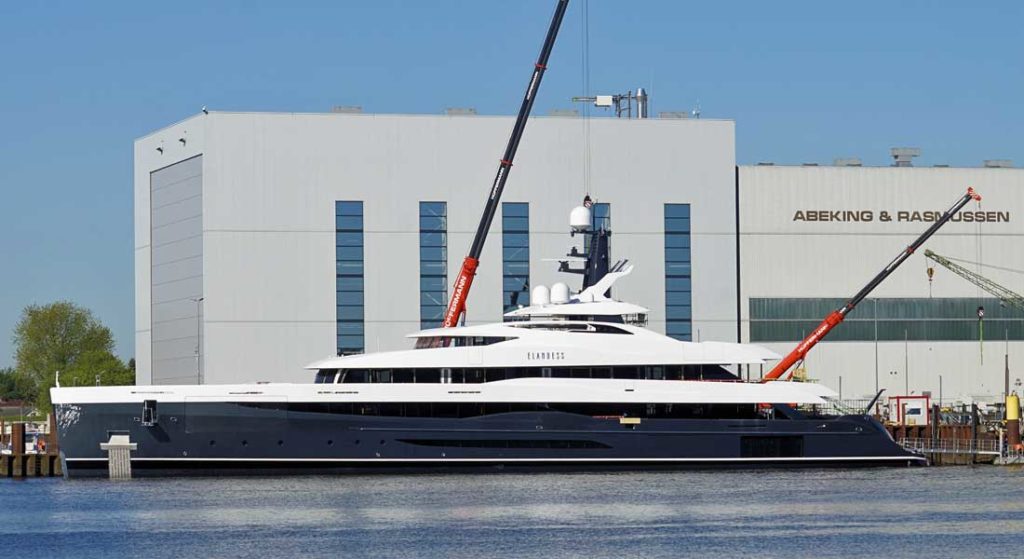 UPDATE, MAY 23, 2018: Elandess is conducting her first set of sea trials. That bodes well for delivery to occur during the summer.

Watch as all 244 feet (74.5 meters) of the secretive superyacht known as hull 6502 appears close to completion at Abeking & Rasmussen. She quietly slipped out of her build shed, bearing blue hull paint and white topsides, yesterday. Her name: Elandess.

This is the first good look we’re getting at the massive megayacht since last year. The raw metal structure of hull 6502 transferred from one build shed to another in July 2017. Work had long begun before that, in Poland. Abeking & Rasmussen uses a subcontractor there to construct its hulls. (Several European superyacht shipyards employ subcontractors in other regions, including other countries.) Notably, when the hull went down that subcontractor’s slipway in December 2015, it marked the first hull launch there in six years. The company had ceased operations during the global economic recession. While it later reopened with new owners, those owners constructed much smaller hulls, launched via gantry crane.

Until Elandess came along, that is. Bearing a beam of 42 feet (12.8 meters), the new yacht features styling by Harrison Eidsgaard. Among her eye-catching features is an Atlantic bow, with high freeboard. This combines with another design element for better seakeeping, especially keeping the forward deck area drier. That element: The deck level shifts farther forward where the bow and waterline meet.

The same studio is handling interior design. Though the shipyard has revealed quite little about the project, we do know that an owners’ party of 12 has accommodations. As you might expect, the master suite is on the main deck. Elandess additionally features an observation lounge on the upper deck, rimmed in floor-to-ceiling glass. Similar windows make the main deck an inviting place to relax as well. Meanwhile, out on deck, a 26-foot-long (8-meter-long) pool will beckon on warm, sunny days.

Abeking & Rasmussen should deliver Elandess in time for the owners and guests to enjoy those days later this year. In the meantime, if the name is familiar, it should be. The same shipyard delivered a same-name megayacht in 2009, measuring 197 feet (60 meters).