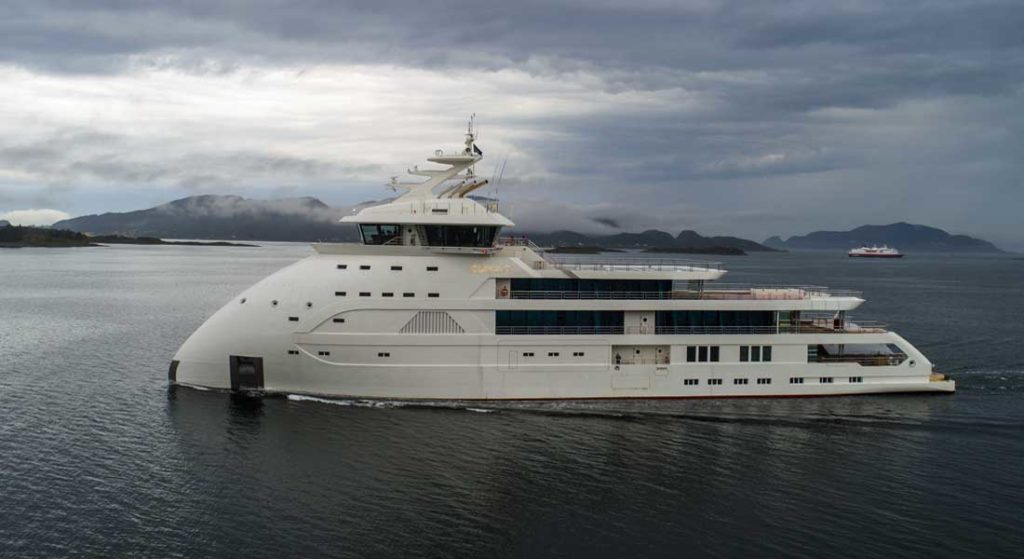 Surely one of the most unusual—and highly anticipated—launches of the year, Olivia O is conducting sea trials in Norwegian waters this week.

Olivia O may look like a commercial craft, but the 290-footer (88.5-meter) is definitely a megayacht. Her owner is tapping the naval-architecture and construction experience of Ulstein, a shipbuilder with its own design department in Norway. Founded in 1917, Ulstein focuses primarily on ferries, service vessels for offshore energy, cruise ships, and other commercial craft. The owner of Olivia O is familiar with the yard’s capabilities, being the owner of a shipping company. The megayacht is Ulstein’s first foray into private cruisers.

The contract signing took place in 2016, but no renderings ever circulated publicly. So, this is the first good look we’re getting at the megayacht. Surely, the backwards-curved bow commands your attention. Termed an X-Bow, the design originated from Ulstein in 2005. The target market was the offshore-vessel industry, due to these ships operating in rough conditions. Now incorporated on more than 100 ships, it serves a few key functions. First, it cuts through waves. Fewer struggles in challenging seas mean less fuel burn, and lower emissions. Furthermore, it means less spray on deck—key for expedition cruise vessels from the shipyard, and of course Olivia O. In fact, her owner specifically wanted the X-Bow.

Being a yacht, naturally Olivia O needed a yacht designer’s involvement, too. The owner tapped Espen Øino for styling and the general arrangement. Unfortunately, details on accommodations and other creature comforts remain confidential. However, aerial images of Olivia O reveal an ample, fully dedicated helideck just aft and beneath her wheelhouse.

Some additional data is available, though, due to public AIS records. The megayacht boasts a beam of about 52 feet (16 meters). In addition, at one point during her sea trials, she hit 16.6 knots.

Ulstein initially planned to deliver Olivia O the first quarter of this year. She likely will be in her owner’s hands by the end of the year.