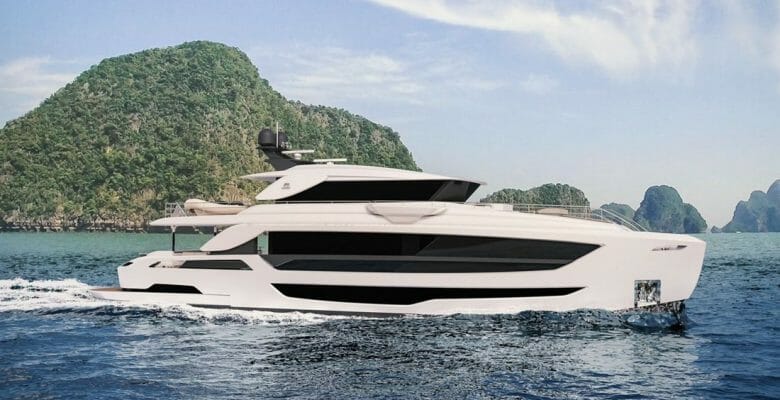 A European owner will take delivery of hull number one in the FD102 Skyline series from Horizon Yachts in two years’ time. The model is the fifth Fast Displacement Series (FD) superyacht so far.

All of the FD projects bear styling by Cor D. Rover Design, arguably more edgy and certainly more contemporary than other Horizon models. They incorporate a hull design emphasizing efficient fuel burn and performance throughout the speed range. “Skyline” comes from the first Horizon FD87 Skyline model. It denotes a skylounge, versus an open-bridge design.

This FD102 Skyline was signed at last month’s Monaco Yacht Show. It’s just two years after the overall FD Series debuted, too. That series includes the FD77, FD85, FD85 Skyline, and FD125 Skyline. “The feedback from owners and potential clients has served to further streamline the FD102 design,” says John Lu, Horizon’s CEO. Cor D. Rover of the eponymous design studio adds, “The new FD102 offers even more than the FD87 in all aspects, from space to layout to amenities.” For instance, LOA is 105 feet. In addition, she’s a full walk-around megayacht, even with beam at just over 24 feet. “Plus, she looks a bit sharper and a bit cooler than her smaller sister,” Rover concludes.

Horizon so far has not said what woods or other soft goods the owner of the FD102 Skyline has selected. Regardless, the megayacht features a main-deck master suite with four guest staterooms below decks. Alfresco lounging spaces include a significant-size foredeck sunpad, as well as a hot tub and U-shaped settee just forward of the wheelhouse. The wheelhouse deck is entirely walk-around, too. Add in a beach club, and the owner and guests of the FD102 Skyline have plenty of places to enjoy.

Rover has plenty of ideas for future FD102 megayachts, too, with or without skylounges. “With an FD102 six-stateroom version now on my drawing board, I strongly believe this boat will be ideal for the midsize charter market,” he asserts.