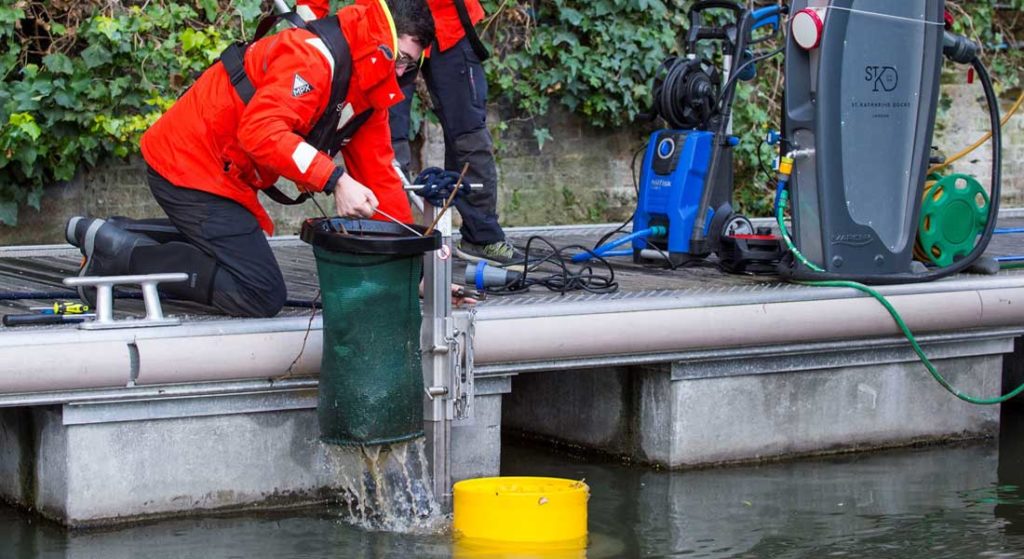 Environmental initiatives are catching on at more and more marinas. St. Katharine Docks in London has embraced a few good related causes in recent years. It’s continuing to keep its attention on the environment, too. The latest effort comes through supporting the Seabin Project.

The Seabin Project started a few years ago by two surfers, interestingly enough, tired of seeing plastics, other garbage, fuel, and additional pollutants in the oceans. They set out to create a product that would automatically collect these waste items. Thus, they invented the Seabin. Just as it sounds, the product is a bin that floats in the water. It’s in use at commercial ports, yacht clubs, and marinas. The moving tide makes the container move up and down, therefore allowing water, and contaminants, to enter a catch bag inside. A water pump empties the water back into the surrounding environment. This, then, leaves the debris trapped inside the bag. Each Seabin reportedly can collect half a ton of floating debris annually.

Three Seabins now sit in the waters of St. Katharine Docks. Paul Tetlow, the marina manager, says the team had been following the product’s success for a few years, before opting to use it. “We are committed to providing a safe and clean environment,” he says, not just for berth holders but also for visitors and staff. Tetlow adds that they “are always looking at ways in which we can support sustainability initiatives and help to fight plastic pollution in the oceans.”

While it’s still early in the garbage-collection process, the marina team anticipates strong results. In fact, St. Katharine Docks estimates that the three Seabins might trap about 3,300 pounds (1,500 kilograms) of garbage annually. Close to the famous Tower of London, the marina sits on the River Thames. Cleanup crews clear a shocking 300 tons of trash out of the river every year. This trash could eventually have floated out to the ocean.