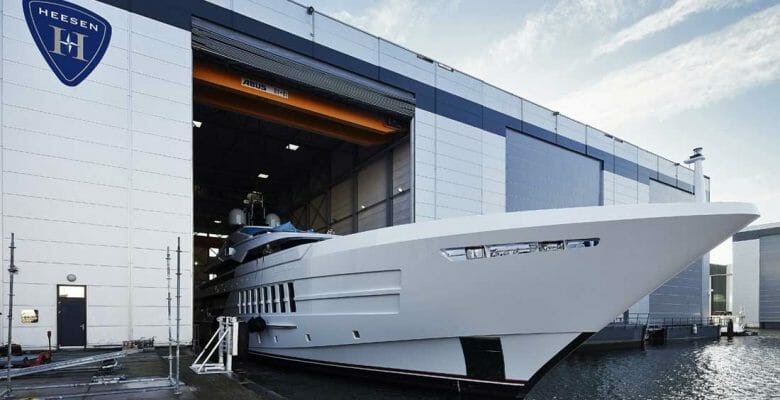 Previously known as Project Antares, the newest Heesen is officially Vida. In addition, before too long, she’ll be serving as a mothership to her owner’s fleet of sportfishing boats.

The 180-footer (55-meter) is the newest member of the Heesen 55m FHDF Steel series. She actually launched on January 4, though at the time, Heesen would only mentioned her still as Project Antares. In addition, it held a few extra facts close to the vest. Now, however, the shipyard is revealing more.

Besides the above-mentioned information about sportfishing, Vida belongs to an experienced American owner. He tapped BE Design Associates to collaborate with Francesco Paszkowski Design and Margherita Casprini on the interior. Based in Florida, BE Design Associates has never previously worked on a yacht project, interesting enough. But, it did design several residences for the owner, so he invited the studio to contribute ideas. As a result, Vida is much like a floating home. Plentiful natural finishes and materials adorn the interior. So, too, do soft colors. While we don’t have full details on the decor, a central attraction surely is a black onyx arch—backlit, too—in the saloon.

Just as sportfishermen need to perform, so does Vida. Being a FDHF megayacht, her hull design, by Van Oossanen Naval Architects, should permit a 4,500-nautical-mile range at 13 knots. Obviously, this means the ability to spend several days at a time out on the ocean. This benefits the sportfishing fleet as well, since Vida can refuel two of them so that they don’t have to return to shore.

An owner’s party of 12 will be able to enjoy Vida come springtime. The plan is to enjoy the summer season in the Med. Look for the megayacht to debut at the Monaco Yacht Show. In the meantime, check out the launch video below.