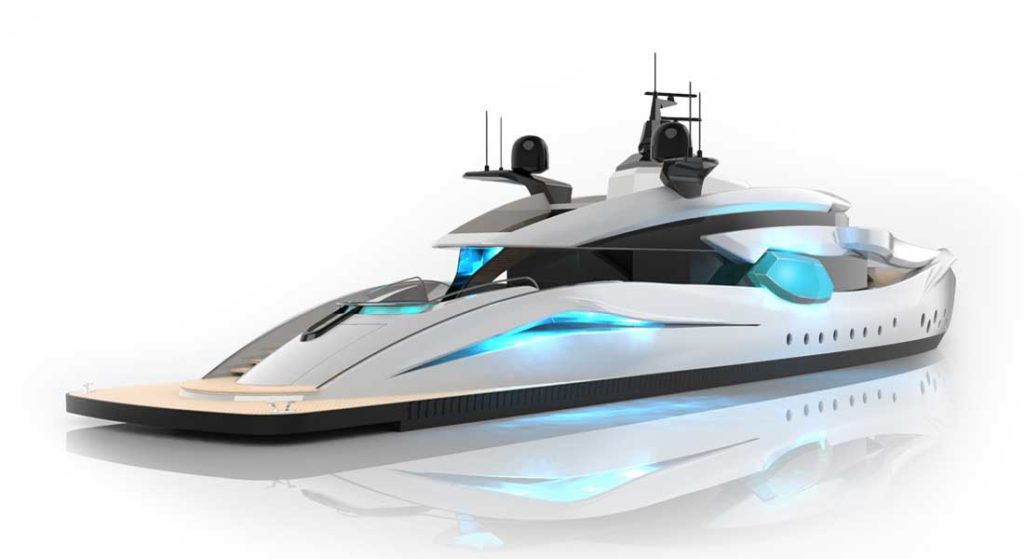 Roberto Curto of the eponymous design studio is fond of unusual approaches. No wonder, then, that Hynosquid, his latest proposal, follows suit. Two hundred and seven feet (63.2 meters) of design inspired by the shape of a cuttlefish, a relative of the squid, the megayacht is still in the early stages of development. SuperYachtsMonaco is therefore consulting with the designer to further advance the details, in anticipation of connecting an equally progressive-minded client and signing a contract for the build.

“As always, we don’t just design conventional yachts,” Curtó explains. “Instead, we take inspiration from ideas which surprise us, or which transmit emotions.” With Hypnosquid, he wants clients to connect emotionally to a few key styling elements. For example, the opening toward the bow is reminiscent of a cuttlefish’s head. Even more so, however, Hypnosquid has attention-grabbing, colored LED ports along her main deck, representing the marine mollusc’s eyes.

Those LEDs, found elsewhere aboard, too, do not interfere with the views from inside. Rather, they accentuate the oversize aspect of the glass windows. In turn, they permit the party of 10 who can stay aboard to better enjoy the views. 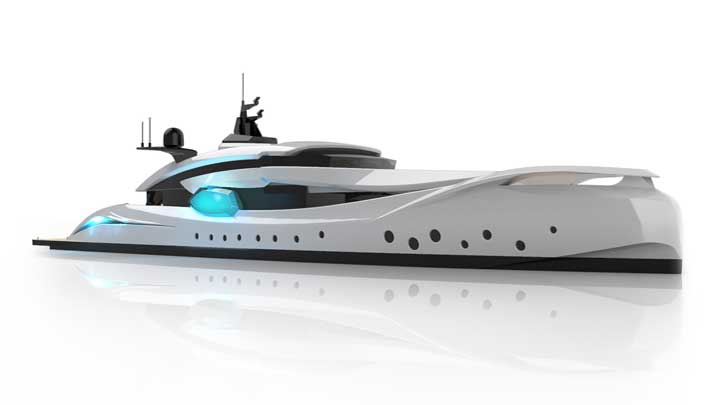 That party size is yet another unconventional aspect about Hypnosquid. The majority of megayachts in this size range accommodate 12. Curtò purposely reduces the guest capacity to provide more space for all, It’s especially beneficial for the owners, of course. In fact, they get a two-level suite, with a lounge as well as a library on the lower deck. To make entering the suite more special, the designer penned a full-beam lobby and garden, with a skylight.

Hypnosquid keeps the avante-garde thinking going on other decks, too. On the main deck, for instance, the galley is akin to a chef’s kitchen, since the dining area sits adjacent. Rather than have the saloon be a mere sitting room, Curtò envisions it leading into a games area, ideal for poker (and fitted with privacy panels to preserve players’ concentration).  Furthermore, Hypnosquid has an alfresco lounge forward of the wheelhouse, plus a cinema in proximity to the lower-deck gym and open solarium.

While technical specifications are still in development, Hypnosquid will, of course, have transatlantic range.