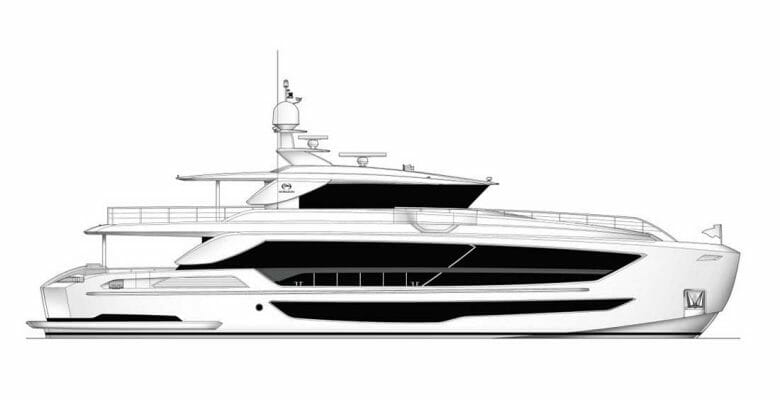 One of the biggest (well, so far) semi-custom models in the Fast Displacement lineup from Horizon Yachts is gaining ground. A U.S. couple who are new customers for the shipyard, but well experienced in cruising, just signed a contract for the second Horizon FD102.

The shipyard revealed the overall Fast Displacement series back in late 2016. All of the projects bear edgy, contemporary styling by Cor D. Rover Design, a distinctly different look than other Horizon models. In addition, they incorporate a hull design emphasizing efficient fuel burn and performance throughout the speed range. Horizon calls it a High Performance Piercing Bow because it has a specially shaped bulbous bow. Just last fall, hull number one of the FD102 gained an owner, hailing from Europe. Six months later, the American couple has signed their deal.

Interestingly, even though this couple has never owned a Horizon, they appreciated a few things. For example, they were attracted to the series because of Cor D. Rover himself. In fact, they’ve owned a yacht designed by his studio. Once they saw the FD102’s styling, they were intrigued. In addition, they were particularly happy to learn that Horizon would arrange the yacht to their tastes.

Therefore, one of the first things you’ll notice about this second Horizon FD102 is that she’s a Skyline version. This means she has an enclosed skylounge, which the owners are outfitting for lounging as well as dining. (Customers of Horizon first saw the model as an open-bridge version on paper in 2016. On a related note, hull number one is also a Skyline configuration.) In a change of pace, the tender won’t sit aft of the skylounge, however. Rather, the toy as well as the davit to launch it will go forward. This in turn frees up more alfresco space on the uppermost deck.

This second Horizon FD102 will let the owners take a good number of friends and family along, too. A twin, two queens, and a king comprise the guest staterooms, all sitting below decks. The master suite sits on the main deck, as you’d expect, and spans the full beam of just over 25 feet (about 7.7 meters).

Extensive cruising is on the agenda for the owners, who plan to take delivery in springtime of 2020.