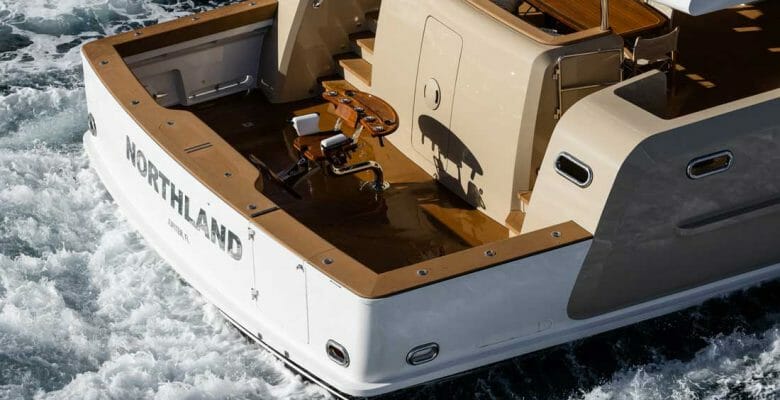 In case the big cockpit doesn’t give you a clue, “fishing is his passion,” says Capt. Jeff Callahan of the owner of Northland. This 103’6″ (31.5-meter) megayacht came about because of this very activity, in fact. The owner wanted to try his hand in the world’s best sportfishing spots. Equally important, he wanted to do so while cruising the world, on his yacht’s own bottom. Add stalwart American construction, ABS classification, and a particular U.S. shipyard. About a year and a half after delivery from Burger Boat Company, he’s pursuing his passion with aplomb. Northland has put almost 10,000 miles under her hull, and has no intention of standing still.

In fact, Northland, christened in November 2017, beginning globetrotting upon delivery mere weeks later. She covered pretty much the entire U.S. East Coast, crossed to the Bahamas, and then began crossing oceans. You read that right: oceans. “We are currently in Tahiti and have put on about 1,000 nautical miles since being here,” Callahan tells us, via email. 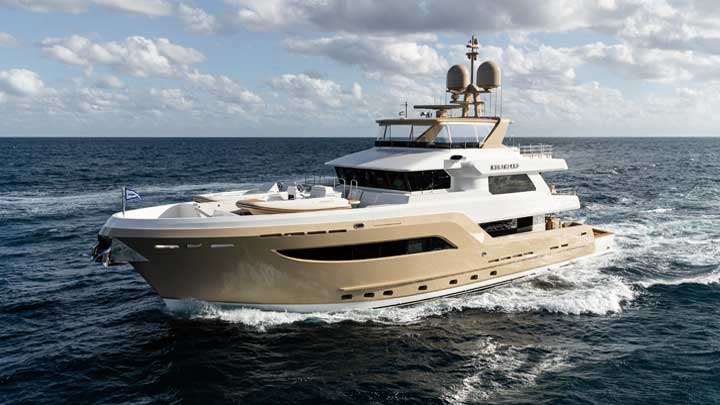 It’s not hard to put on those miles, either. Northland, featuring a steel hull—the first steel-hulled Burger in about 50 years—enjoys a reported range of 4,000 nautical miles at 9½ knots. The owner specified this range, according to Callahan. Carrying 9,790 gallons (37,059 liters) of fuel, the Caterpillar-powered megayacht tops out a little over 12 knots.

To ensure safety and reliability while on long-range explorations, a few more must-haves were on the owner’s list, Callahan says. These include an oversize anchoring system with plenty of chain (and stowage), plus an equally oversize, 100-hp bow thruster. One genset needed to be able to power Northland, too, in case of issues. The two custom tenders kept on the bow needed a fueling station as well. “We carry no gasoline or propane: safety reasons,” Callahan explains. As to why the tenders are on the bow, look back at that big fishing cockpit. This negates a tender garage, and even beach club. The owner doesn’t miss them, either. 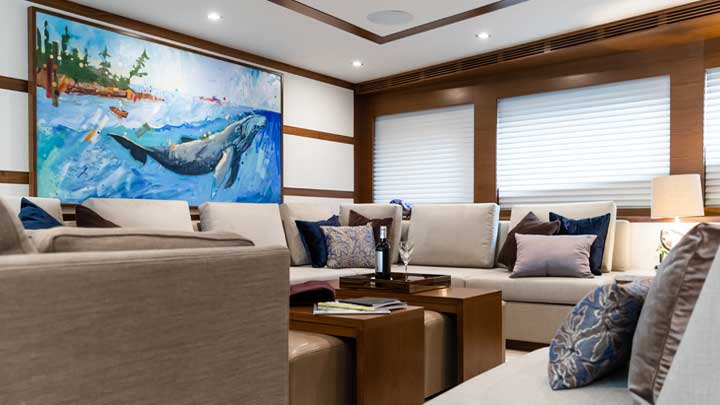 It’s not surprising. He has a baitwell, custom tackle center, custom rod holders, carbon fiber outriggers, fishbox fed by an ice chipper, and a custom fighting chair to use. “Basically exactly what you would find on a sportfishing boat, except bigger,” Callahan says.

Of course, the relaxation areas (or, perhaps, fish-tale-telling areas) are bigger as well. Northland devotes the entire main deck to socializing with friends and family. Callahan says the library (above), forward on the main deck, is particularly popular. In working with Luiz De Basto on the layout and design, the owner ensured it can double as a theater room. 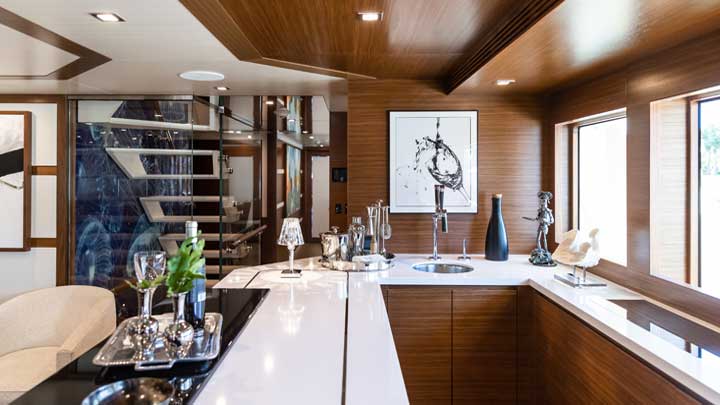 The social aspect of the main deck means the master stateroom can’t occupy real estate here. Once again, a deliberate choice of the owner’s. Therefore, his suite sits up with the wheelhouse. This keeps it private, plus all but guarantees Northland’s guests will indeed use the social areas. For example, her saloon sees them gather most nights for cocktail hour (below), thanks to a bar, Callahan says. “The flybridge is a major favorite pretty much all day,” he continues. “Dinner is usually served there.”

Imagine the dinners enjoyed as Northland visited Moorea and Bora Bora. These are tops among the destinations visited thus far. Then again, Callahan says, Fiji is on the itinerary for July, so they may get a run for their money. But, so is Vanuatu… and New Caledonia… and Australia… and…