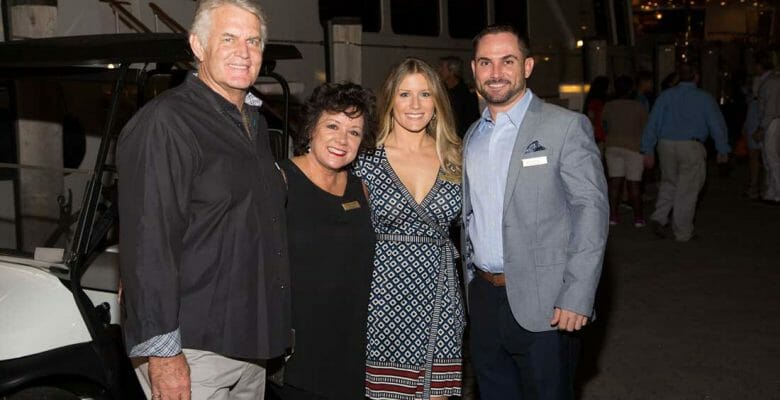 Claudette Bonville, who established the interior-design firm Claudette Bonville Associates and worked with numerous yacht owners and builders, died last month following a battle with cancer. She was 66 years old.

Born in December 1952, Bonville was attracted to design early on. In fact, she earned a bachelor’s degree in interior architecture at Kansas State University. Following a few years as a flight attendant, she founded Claudette Bonville Associates in 1987, in Fort Lauderdale. Initially, she collaborated with hotels, resorts, and cruise ships. Her first foray into the yacht market was a big one: Lady Anna, the then-largest sportfishing yacht in the world. Commissioned by American real estate developer Hirar Hovnanian in 1991, Lady Anna measured 121 feet (36.9 meters).

In the ensuing years, Bonville took on more new-build megayachts, handling all aspects of interior design from space planning to decor. She long counted the 124-foot (37.8-meter) Delta Lady Linda, from 1999, as a favorite project. In addition, she established strong relationships with several owners, becoming their go-to choice. This was true of the owner of the 150-foot (45.72-meter) Seahawk, launched by Trinity Yachts in 2001. So, too, did the owner of the 180-foot (55-meter) Harbour Island, built by Newcastle Shipyard in 2011, prefer working with Bonville.

Claudette Bonville Associates benefitted from not just the growth of the new-build market, but also the refit market. For instance, Bonville collaborated with the owners of the 164-foot (50-meter) Delta Victoria del Mar (originally Happy Days). She and her team additionally worked with the owners of yachts built and refitted around the world. Indeed, the studio most recently redesigned the interior of a Feadship, the 180-foot (55-meter) Cynthia. Cynthia initially launched as Twizzle in 2005, undergoing changes in 2018. On a related note, Claudette Bonville Associates received Design et al magazine’s International Yacht & Aviation Award for Best Deck Design earlier this year for the project.

The same drive that Bonville brought to yachting further characterized her devotion to the Boys & Girls Clubs of Broward County. (She’s pictured immediately above, second from right, at a recent event.) A staunch supporter for more than two decades, she received multiple awards from the non-profit. On a related note, this writer vividly recalls Bonville getting Oprah Winfrey to come to the annual Boys & Girls Clubs Rendezvous in 1996, where Winfrey retold Bonville’s convincing pitch. The designer half-jokingly pledged to stand in her underwear and sing if Winfrey would attend. Bonville’s uproarious laughter confirmed the story.

Bonville brought that same sense of humor to her work life and, according to her family, to tackling her cancer diagnosis in 2011. She is survived by her husband Michael, son Chase, daughters Lauren and Bridget, and three grandchildren.

A celebration of life will take place during the Fort Lauderdale International Boat Show. In the meantime, in lieu of flowers, the family requests that donations be made to the Boys & Girls Clubs of Broward County.