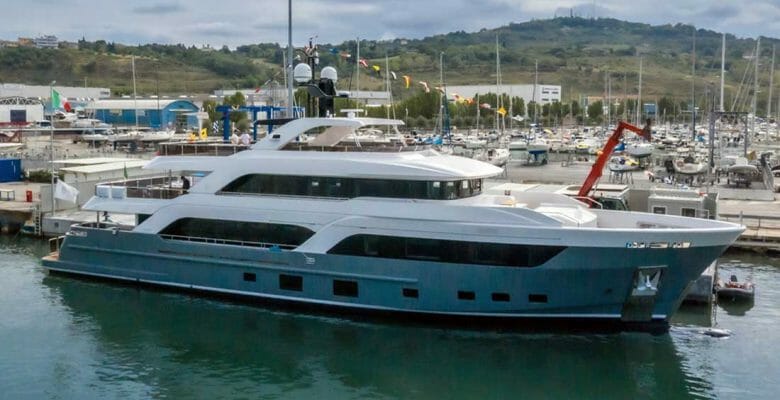 Not even a rainstorm could dampen the spirits of the launch ceremony yesterday for the Acciaio 123 at Cantiere delle Marche. Among the shipyard’s largest megayachts thus far, the explorer yacht slipped into the water during a private ceremony.

The unusual name comes from two things. “Acciaio” means “steel” in Italian, while “123” is her length in feet, the equivalent of 37.35 meters. Moved into her finishing shed in March 2018, the steel-hulled yacht is the second Acciaio series launch thus far. The first was an Acciaio 105. Both come from the naval-architecture studio Hydro Tec. For the 123, the studio’s Sergio Cutolo designed a high bow and high bulwarks flanking the wheelhouse, to convey a sense of strength and security. Conveying yacht-like luxury, the bow incorporates a gentle curve, as do the overhang over the wheelhouse windows and the radar arch.

Also for luxury, the Acciaio 123 accommodates a party of 12, as well as seven crew. The owners worked with Cantiere delle Marche to design the interiors of the three-deck yacht. The main deck luxury areas span the full 25’6” (7.8-meter) beam, as does the owners’ suite. While photos are not yet available, the stateroom rivals those aboard larger megayachts.

This is not to imply, however, that the owners reserved the lion’s share of space benefits for themselves. The chef should be pleased with the galley, since it, too, sits on the main deck and is ample.

Sea trials should confirm a top speed of 13 knots under Caterpillar diesel power. At 10 knots, the Acciaio 123 should see a best range of 5,500 nautical miles. The owners plan to put this long range to good use, staying away from shore for long periods.