You are here: Home / Yachts / Motoryachts / Wider 180 to Usher in 100% Electric Technology for Yard 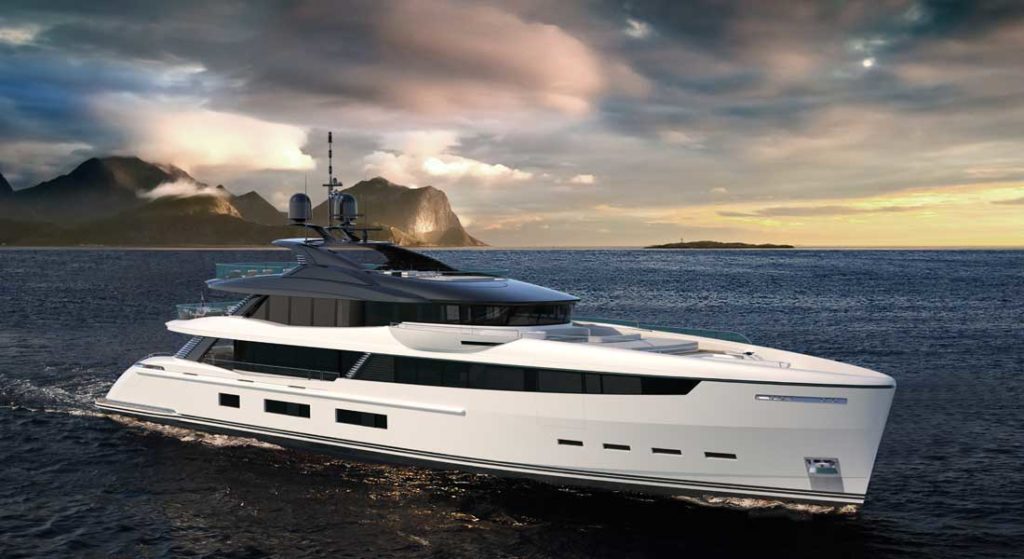 The word innovation gets tossed around a lot, not always properly. Wider Yachts first opened its doors about a decade ago with an eye toward building voluminous, environmentally minded megayachts. In fact, the founder, Tilli Antonelli, was so convinced of the importance of hybrid propulsion packages that every proposal included them. The new ownership team shares the mindset. Starting with the Wider 180, with delivery in 2022, Wider Yachts will strive for entirely electric technology.

Members of the media received exclusive insight into this new focus at a press event during the Monaco Yacht Show. “Tilli was ahead of his time,” asserts Marcello Maggi, Wider’s president. These days, he continues, “a lot of people talk about hybrid, but they don’t have the systems of Wider.” The Wider 150, for example, started on spec early this decade with diesel-electric propulsion. A Canadian couple acquired her after completion, attracted to the powertrain, among other things. No other megayacht in her size range featured this system. Similarly, the Wider 165, Cecilia, employs diesel-electric propulsion, developed with Emerson. She, too, pioneered the use of diesel-electric in her size range.

The Wider 180 is the first step toward entirely zero-emissions yachts within five years, Maggi explains. Tiziano Giovannetti, a Wider partner, echoes this. “One of our main goals is to achieve a complete electric propulsion system without the actual limitations in range and speed, and we will do this in five years’ time,” he says. Giovannetti has extensive experience in “green” energy, via a company developing and consulting on wind and solar energy projects.

Therefore, the Wider 180 features one genset with an emergency backup, plus a battery bank. Anticipate a 12-knot cruise resulting in a range up to 5,000 nautical miles. You can anticipate even better range at 9 knots: 7,500 nautical miles. Zero-emissions speed, meanwhile, comes at 6 knots, allowing 10 hours of operation. Wider says the battery bank will need just 1.5 hours to return to full charge after this. Further noteworthy, the emergency genset will be capable of running the megayacht at 8 knots.

All of this comes in a styling package from Vallicelli & C. In true Wider tradition, the Wider 180 has an expandable beach club, plus a float-in, float-out tender garage that becomes an interior pool. With three platforms open, the beach club encompasses 1,722 square feet (160 square meters), in fact. As for the tender, the Wider 180 can hold a Wider 32.

The first aluminum plates are set for cutting in February of next year. This leaves plenty of opportunity to tailor the Wider 180 to your liking.

Besides this project, the shipyard has a Wider 135 in development. She, too, is a hybrid, and features an unfolding beach club. Finally, the shipyard is exploring diesel-electric propulsion for the Wider 32 and 42 powerboats.