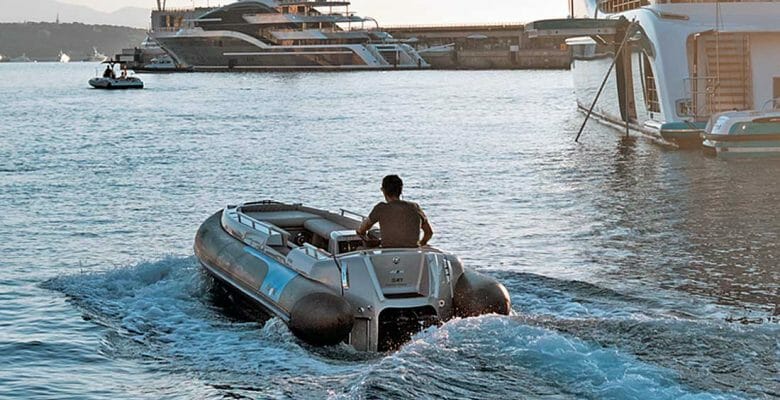 Look aboard any megayacht, and you are sure to find at least one RIB. Look aboard those same yachts, and you are sure to find owners and crew increasingly concerned about emissions. The Avon eJET 450, created by leading RIB manufacturer Zodiac Nautic, addresses this. The first production-series electric yacht tender targeted to megayachts, it additionally has a hull promising better performance and dryness.

Zodiac Nautic collaborated with a company called Petestep for the new 14’8” (4.5-meter) RIB. Established in 2012, Petestep focuses on making planing boats ride better, through patented technology that it licenses to builders. Overall, Petestep claims this technology, applicable to a variety of LOAs, results in boats that deflect more spray, pound less, and consume less fuel. Specifically with the Avon eJET 450, “Petestep’s simulations proved very accurate,” according to Antoine Hèber-Suffrin, Zodiac Nautic’s product manager. “The range in planing speeds was actually increased by 15 percent,” he explains. The top speed, meanwhile, went up 10 percent versus a conventional hull’s speed. In fact, it reportedly hits 30 knots. “The ride is also incredibly dry,” he adds.

At that 30-knot speed, the tender should be able to run for an hour and a half straight. Since that’s an extreme situation, you can expect about four hours of use under normal RIB operations. In addition, if the Avon eJET 450 putters along at just 5 knots, you can expect eight hours of use.

Regardless of your performance preference, the Avon eJET 450 has a proprietary electric jet driveline to ensure it’s emission-free. A BMW i3 battery works in concert with the 55-kW Torqeedo electric engine, which Zodiac Nautic says has instant torque to get you on plane fast. On a related subject, the electric propulsion means quiet performance, making the experience even better.

Avon has several more models in the works as well, all eJETs.