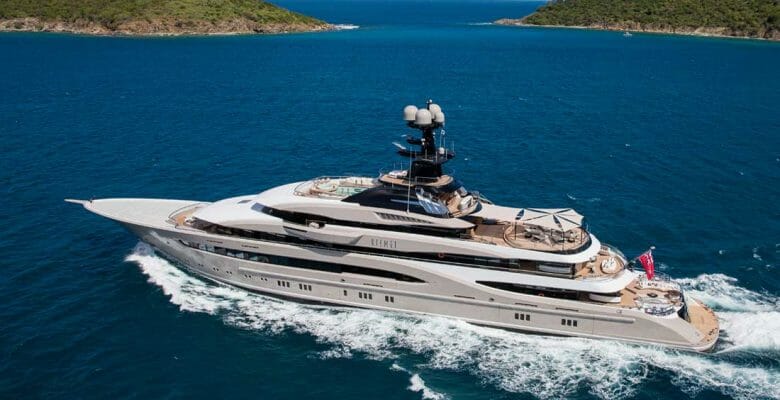 “Welcome to the world’s biggest magnet,” actor Ryan Reynolds says while in the engine room onboard Kismet. Seconds later, he and his fellow actors are involved in a shootout on one of the megayacht’s aft decks. It’s not real life, of course. These edited scenes are in the trailer of a new Netflix film. You can see them as well as the rest of Kismet in the movie 6 Underground right now, since the streaming service released the film on December 13.

The movie is the latest big-budget ($150 million), big-explosion experience from famed director Michael Bay. As the start of 6 Underground, Reynolds plays a tech billionaire who fakes his own death and recruits a team of international vigilantes to take down a dictator.

Some of those explosions did actually take place onboard the 312-foot (95.2-meter) Kismet. In fact, cinematographer Bojan Bazelli tells IBC, an online news site for the international media, entertainment, and technology industry, that the filmmakers needed to be extra-mindful during the shootout scene. “It had teak floors which we had to protect in case they burned down,” he explains. No doubt they didn’t want to damage the opulent Reymond Langton Design decor, either.

Filming took place in Taranto, Italy in October 2018, over the course of about a week. Local residents gathered along bridges to watch some of the action. Others further shot pictures and videos with their mobile phones from their homes. Interestingly, though, some of the scenes of Kismet in the movie 6 Underground didn’t actually take place on the yacht. In fact, Bazelli says that the production team built a replica of a portion of the yacht, at Cinecittà Studios in Italy.

Skip ahead to the 2:20 mark to get a glimpse of Kismet in the movie 6 Underground. To experience her in real life, she charters through the central agency of Moran Yacht & Ship.