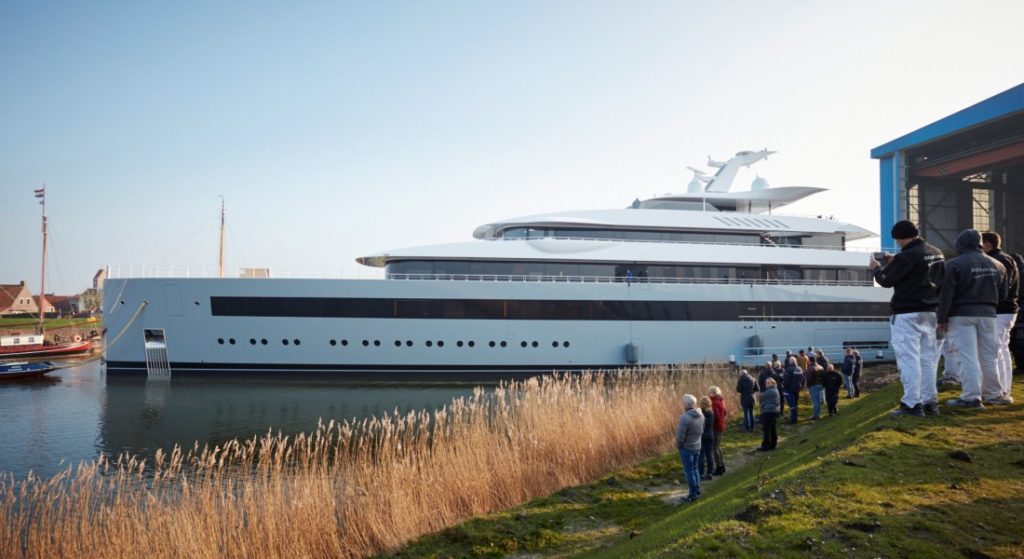 While a lot of yacht watchers pay attention to launch day, subsequent days are equally important. For instance, the day Moonrise departed the waters around her build shed in The Netherlands for Amsterdam this month was pretty important. She headed off to get her propellers fitted and undergo some other checks before beginning sea trials. As you’ll see here, Moonrise makes her way through some seemingly skinny locks, making for spectacular scenes.

Moonrise shone brightly at her launch in February, showing off a grey hull and white superstructure. She also showed off impressive lines along her 327’9” (99.95-meter) length. Due to her plumb bow, she has a pretty long waterline length, too. In fact, she is the largest megayacht in terms of waterline length built in The Netherlands so far.

Also known as Hull 1008, Moonrise makes her way from Makkum under the careful guidance of tug boats. At times during her journey, helpful hands on land scurry about with giant fenders, to protect her as she passes through the locks. For perspective, consider that her beam is a more-than-healthy 50’8” (15.5 meters).

Although we don’t get to see her interiors, Feadship says the megayacht has staterooms for 16 people. Furthermore, and equally important, Feadship says the owner wanted the crewmembers to enjoy a high standard of living and working. Therefore, the crew quarters, for up to 32 people, are reportedly a cut above.