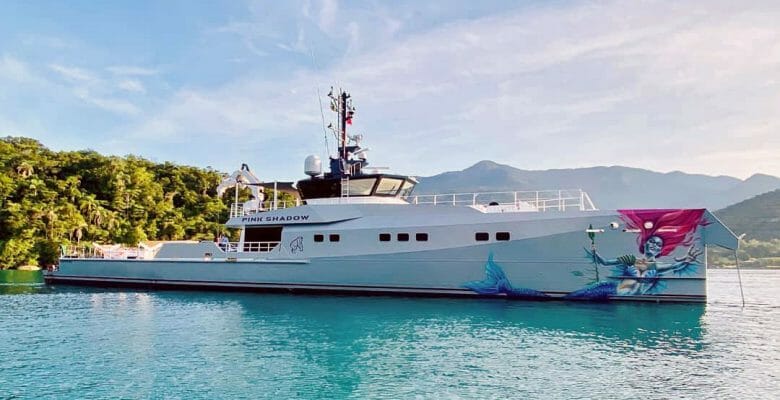 Currently in the Caribbean, Pink Shadow is making history with every day that passes. She has already recorded some historic firsts, too, for both Damen and the yachting industry at large.

For starters, this Damen Yacht Support vessel is the inaugural launch and delivery in the YS 4508 series. With an LOA of 149’6” (45.6 meters), Pink Shadow may be among the smaller Yacht Support projects thus far, but no less capable. Launched as Joy Rider and premiering last fall, the vessel went through some big seas from The Netherlands en route to her boat-show debuts in France, with no issues. She was built on spec to blend yacht amenities with support amenities. For the former, she has accommodations for six guests and seven crewmembers. Of course, for her support role, she additionally has about 1,292 square feet (120 square meters) of deck space for tenders, including a submarine if so wished, as well as a helipad.

The concept of the Damen Yacht Support line has caught on internationally with several owners, all of whom have power megayachts. Interestingly, Joy Rider caught the attention of the owner of a sailing superyacht. Specifically, the owner of the appropriately christened Pink Gin decided the vessel would be the perfect companion. Therefore, shortly after acquiring her, the owner sent the Damen Yacht Support vessel to Rybovich for some adaptations. These include the eye-catching graphics and color scheme seen above.

Upon redelivery, Pink Shadow undertook an extensive journey from Florida to South America for time with her owner. It’s the type of journey that Damen planned with the engineering. It provides a reported 5,000-nautical-mile range at 12 knots under Caterpillar power. She then headed to the Caribbean, in anticipation of accompanying Pink Gin while she competed in the St. Barths Bucket. While the regatta, initially set for this week, was cancelled, surely many more adventures await the duo.