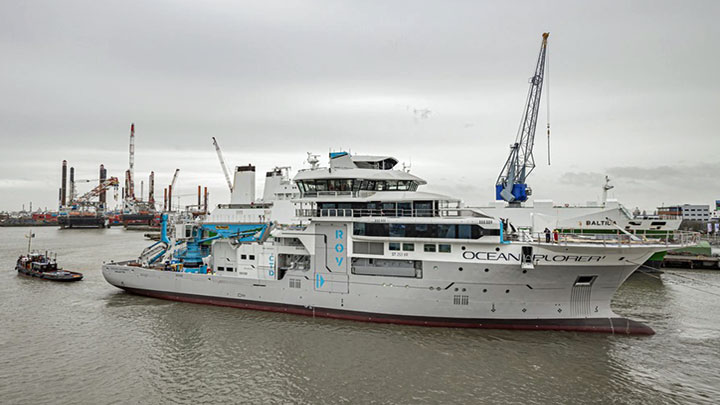 OceanXplorer, the deep-sea research vessel with megayacht-like amenities, has been conducting sea trials for the first time this month.

With an imposing, take-on-the-world stance, OceanXplorer is the result of a major refit that has been going on for the past two years. Originally, she launched as an oil-survey ship from Freire Shipyard, based in Spain, back in 2010. OceanX, an organization focused on ocean research, education, and filmmaking, acquired the vessel. It took her to Damen in The Netherlands for conversion, a little over a year ago.

The conversion has involved creating luxury areas from lounges to staterooms, courtesy of Gresham Yacht Design. The same studio is responsible for restyling the profile of the nearly 286-footer (87.1-meter). However, luxury cruising is not her primarily purpose. Rather, OceanX intends to use OceanXplorer—which originally was to be named Alucia2—to host leading scientists, filmmakers, and more. Together, they will employ science, storytelling, and technology to educate and inspire people globally about the oceans, and especially about conserving them.

In the sea-trial footage, you can see, for the first time, a 40-ton-capacity A-frame crane on her vast aft deck. (On a related note, you get a sense of just how massive the vessel is just under one minute into watching it, when people suddenly come out on deck towards the deckhouse.) That crane will help launch submarines and ROVs, crucial to her research and exploration focus.

Since OceanX has previously collaborated with noted director James Cameron and others on ocean documentaries, it intends to do the same with OceanXplorer. Specifically, parts of her maiden voyage will feature prominently in a six-part series called Mission OceanX. It will cover “the farthest frontiers of the world’s oceans,” according to a press release.