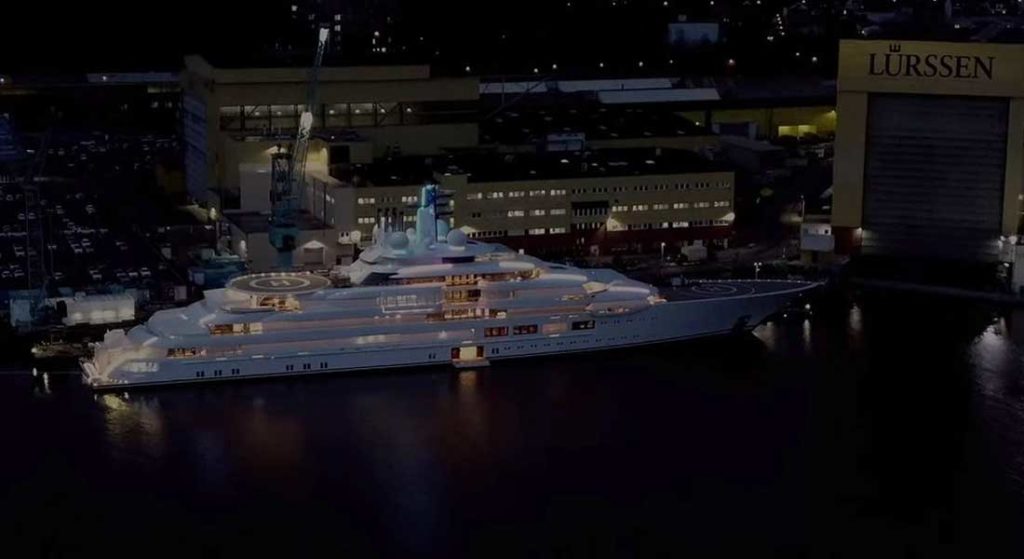 The 459-foot (140-meter) megayacht bearing the code name Project Lightning is still receiving her final fit-out features and amenities in Germany. However, true to her code name, she put on quite a visual show one evening this month. Her colorful exterior deck lighting accentuates her place as one of the largest yachts in the world, currently in the water at Lürssen.

Shades of blue, purple, and yellow cast gentle glows against the structure of Project Lightning as nighttime began to fall. When full darkness took effect, the colors became even more pronounced. Although Lürssen and its collaborators have been held to a confidentiality agreement, preventing them from commenting on the build and design, some yacht watchers speculate that styling is by Espen Øino.

Regardless, Project Lighting, which is among the most-anticipated megayacht deliveries of 2020, has been on these same yacht watchers’ minds for a few years now. For example, her unfinished hull and superstructure floated out of one build shed into another at Lürssen in 2017. In addition, just in the last months of last year, fans observed her conducting sea trials.

Even though the build and design teams cannot comment on her special features, we do know that she has two helipads. One sits on her foredeck, while the other is higher up, aft. Finally, due to having mostly covered decks, her owner (or owners) may plan to use her primarily in hot, sunny climates.