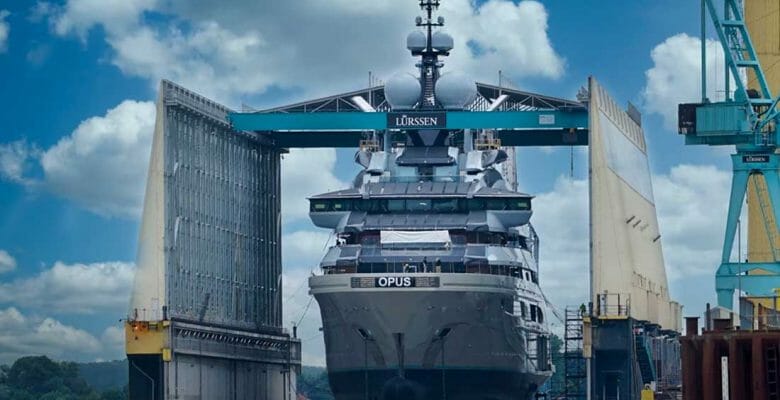 Not even rain can dampen spirits on launch day. Especially when the yacht in question will rank among the 20 largest private vessels in the world upon delivery. Project Opus is that particular yacht. As you’ll see in the video here, she made a grand appearance outside of her build shed just yesterday.

Besides bearing an eye-catching color scheme, the yacht reveals a few other features for the first time. For instance, her uppermost deck appears to have a heli hangar—or at least a hangar for another large craft. Additionally, right above the waterline, three large hatches sit one next to the other starting at the stern. They further get progressively larger as your eye moves forward, plus have multiple ports apiece. Judging from most megayachts, these could be openings to areas like a beach club and/or a spa.

Regardless, at some point we will have specific details about some design features. Both Lürssen and Nuvolari-Lenard say they will be able to share. In the meantime, the builder and design teams have revealed that Project Opus contains 20 staterooms for 36 people. Furthermore, they have disclosed that the megayacht will carry 49-foot-long (15-meter-long) tenders, some of which are for diving. Naturally, she has has her own dive center, too. Finally, she’ll will carry two helicopters.