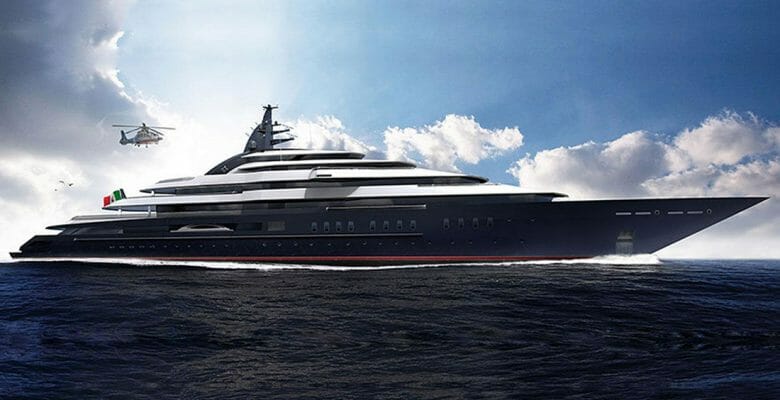 With an LOA of 466 feet (142 meters), Project Redwood is among the largest megayachts under construction. She’s taken another major step forward in that construction at Lürssen, too. She’s moved into a floating dock for more of her superstructure assembly.

Initially announced by her project-management team at Moran Yacht & Ship as 456 feet (139 meters), Project Redwood appears in this video, shot this week. It’s clear that her upper decks aren’t all fully in place yet. The megayacht should eventually stand six decks tall. In addition, given regular practice at Lürssen, the floating dock will soon gain a cover for work to continue.

Though not all of the megayacht is visible, you do get to see her dramatic bow flare. Compare the partially constructed Project Redwood to the rendering at top, from Nuvolari-Lenard. This section only recently joined the rest of the hull. In fact, back in October, the bow-less forward portion of the yacht floated out of its build shed.

Nuvolari-Lenard is not just responsible for styling, either. It’s also handling interior design. Nuvolari-Lenard revealed more details about the overall design in 2017, two years following initial public word. For instance, Project Redwood has two helipads (surely one on that elongated foredeck). Yet another notable detail, she’ll invite guests to go diving, thanks to a well-equipped sports and diving center. If someone would rather swim, they’ll have a choice of taking a dip in the ocean and doing laps in the lower-deck pool. Finally, Project Redwood will carry multiple healthy-size tenders. In fact, Nuvolari-Lenard says each is 49 feet (15 meters).

Big tenders tend to hint at big owners’ parties. Project Redwood certainly follows suit. She will have 20 staterooms, for 36 people.

Originally expected for delivery next year, the megayacht should instead see hand over in 2020.