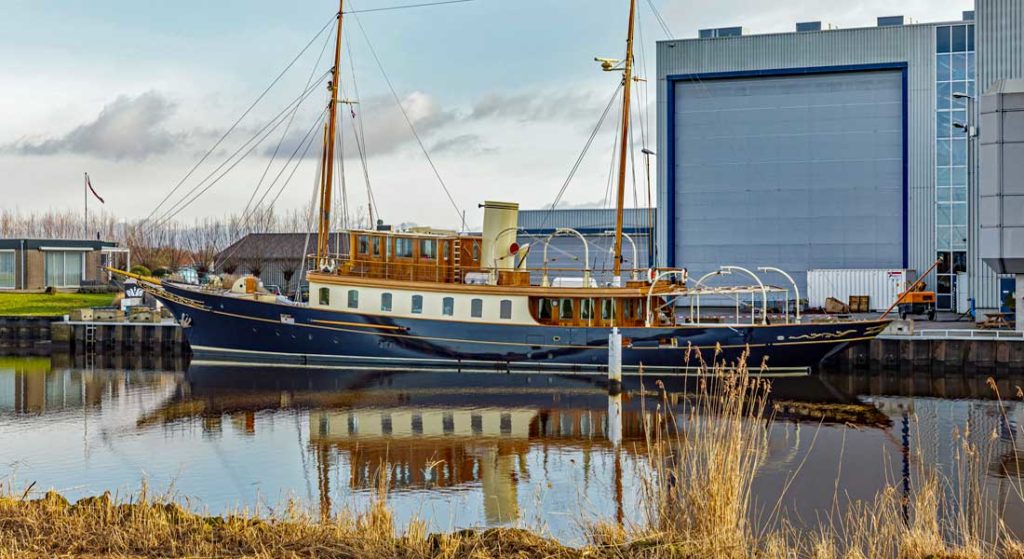 If the third time is the charm, then surely the fourth time will be even better. Jim and Kristy Clark, the owners of the classic sailing superyacht Atlantide, are beginning their fourth project with Royal Huisman. The 90-year-old yacht will spend the next year undergoing restoration and rebuild.

The Clarks acquired Atlantide, which has a storied history with other high-profile owners, just this past October. As for that history, she launched in 1930 as Caleta in England for Sir William Burton, a Brit with a passion for yacht racing. In fact, he was the helmsman for the J-Class yacht Shamrock IV, which competed for the America’s Cup in 1930. Burton used the 122-foot (37.28-meter) Caleta as a place to relax with guests during regattas. Fast forward to 1998, and the late Tom Perkins, another renowned yachtsman, bought her and commissioned a complete rebuild. For the following six years, Atlantide cruised alongside Perkins’ early-20th-century racing schooner Mariette. She later accompanied his Maltese Falcon around the globe, plus ventured far and wide on her own.

As for the Clarks, they, of course, are no strangers to yachting. Neither are they strangers to Royal Huisman—which explains Atlantide being the fourth yacht of theirs in the yard’s hands. For instance, last year, the shipyard serviced their J-Class yacht Hanuman, which also saw original construction at the same site back in 2009. Additionally, between the late 1990s and early 2000s, the Clarks had Royal Huisman build them two other sailing superyachts. Specifically, they are Hyperion and Athena.

Although Royal Huisman has not revealed specifics about the restoration, it does say that the Clarks shipped Atlantide across the Atlantic from Newport, Rhode Island the first week of this year. Furthermore, the shipyard says work should wrap up by springtime next year.

In the meantime, Jan Timmerman, Royal Huisman’s CEO, says the Huisfit team is happy to have “our esteemed clients Jim and Kristy Clark” back. “If a discerning client commissions a fourth very substantial project to the same shipyard, you just know that the work you perform is truly appreciated,” he notes.