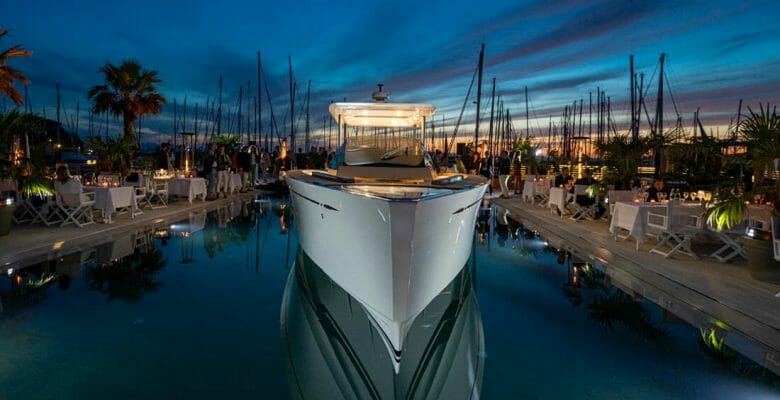 The first-ever powerboat from renowned sailing-yacht builder Nautor’s Swan appeared in the Mediterranean this month. Fittingly, the Swan Shadow premiere took place during the Swan Sardinia Challenge in Porto Cervo.

The powerboat—specifically, a 43-foot (13.2-meter) chase boat—is a way for Nautor’s Swan to enter the motoryacht market. Notably, Leonardo Ferragamo, president of Nautor’s Swan, has been eager to produce a powered craft for some time. He didn’t want to produce a powerboat just for the sake of it, however. “We always resisted this temptation until we really felt we had something really special and unique to present,” he explains.

Nautor’s Swan has earned a reputation for high-performance sailing yachts, of course, especially for regattas. So, the Swan Shadow needed to be high performing, too. Therefore, a choice of triple 225- to 350-hp Mercury outboards delivers a top speed up to a head-turning 55 knots. Similarly, the yard wanted her to be high performing in adapting to differing needs. One way it did so is by nestling the outboards within a movable aft platform. This section can lower to become a swim platform, for example, making her a watersports toy. Alternately, the platform can rise to dock level to ease boarding, thereby making her more of a guest tender.

During the Swan Shadow premiere, the boat showed off one of a few available configuration options. She has a T-top, which further can include telescopic support pillars and sliding glass panels. This convertible-cabin configuration is practical for cool days, for instance, or changeable weather. Also practical, a crew cabin sits below, in the bow. Note that the Swan Shadow offers a limousine-tender layout as well.

Ultimately, the project packs features that most owners don’t get in chase boats in her size range. “She is full of the ingredients we believe in,” asserts Ferragamo. “We are confident that we are going to make an important statement in the power-yacht segment.”

Jarkko Jämsén, Swan Shadow’s designer, certainly agrees. “Together we wanted to create something sporty and fun, without compromising on the elegance customers have grown to expect from a Swan.”