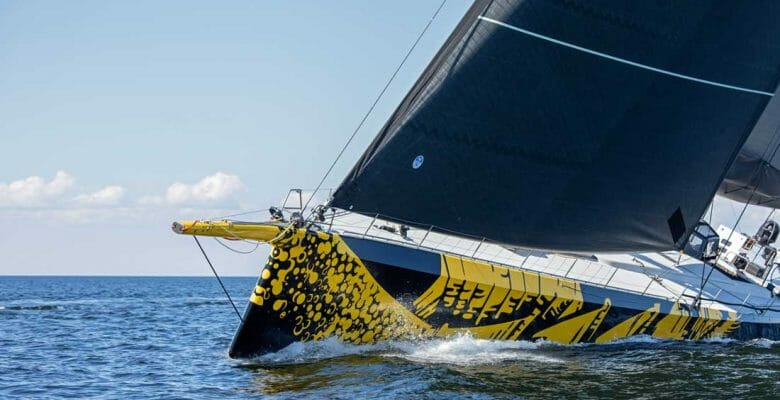 With her sights set firmly on the Rolex Fastnet, the ClubSwan 125 Skorpios is out to prove a few things. Firstly, she intends to break records. Secondly, Nautor’s Swan is confident this performance One Design racing yacht will “be a milestone in the history of yachting,” says Leonardo Ferragamo, Nautor Group president.

The black-and-yellow color scheme, plus the large scorpion on her sails and hull, clearly conveys she is no ordinary racer. (The owner’s family owns the private island Skorpios, a.k.a. Scorpios, in Greece.) Note, too, that she will be the largest monohull to race in the Fastnet. Imagine, then, seeing the ClubSwan 125 Skorpios running at about 15 knots upwind and exceeding the wind speed downwind, two things her design and build team pledge she can do.

The owner, an experienced sailor and racer, owned a ClubSwan 50 for a few years before commissioning this project in 2017. Notably, the 50 and 125 share the same naval architect, Juan Kouyoumdjian. However, they do not share all of the same features or technologies. For instance, the new yacht has a rotating hydrofoil. It improves sideways lift as well as vertical lift, depending on the situation. Additionally, the 125 has a deep-draft canting keel, reducing weight for this already lightweight craft, plus increasing righting moment. (The yacht employs carbon fiber composite construction with Nomex and CoreCell coring.) A retractable prop for her diesel-hydraulic propulsion system further reduces drag.

Interestingly, the owner’s vision changed along the way. “The brief was at first for a very fast superyacht for inshore racing,” explains Enrico Chieffi, Nautor Group vice president and the project leader for the 125. But, he continues, “We all realized, the owner at first, this yacht was meant to be a record-breaking machine.” In fact, she plans “to beat all the monohull records around the world.”

Giovanni Pomati, Nautor Group’s CEO, says there’s a tinge of sadness at the shipyard now that the ClubSwan 125 Skorpios is finished. “We had not one day without excitement dealing with what we like to call this beast,” he says. In fact, she “allowed us to push our limits to the extreme to create something great.”