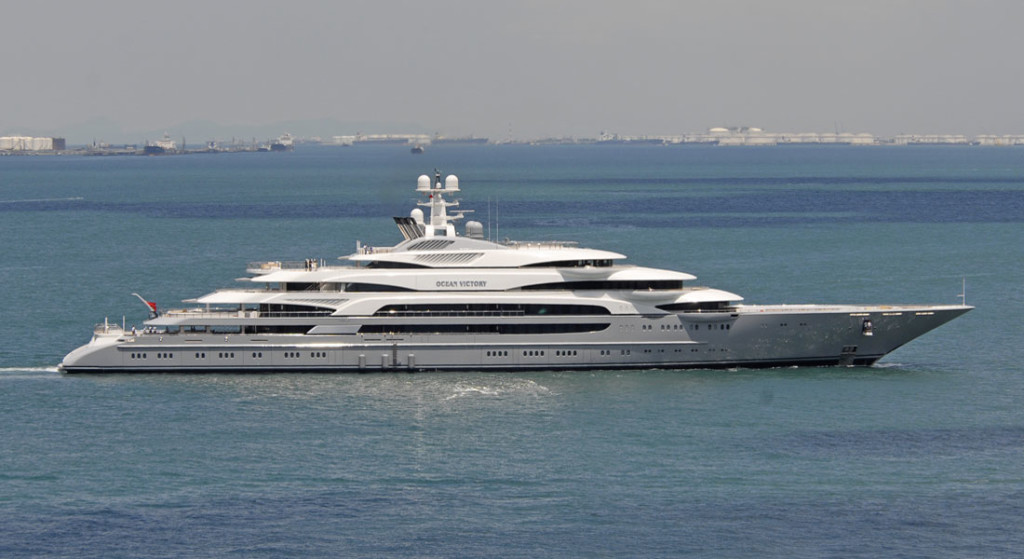 Five months after Ocean Victory, the largest megayacht made in Italy, was delivered, we’re finally seeing her in action.

We say “finally” because Ocean Victory was kept under tight wraps during her four-year build at Fincantieri. That extended even to the day she was delivered. Typically, shipyards can release even a simple sea-trial photo. Fincantieri was not permitted to do so. A photo of Ocean Victory just prior to launch last year did make the rounds on social media channels, but taken by an independent person. The photo here was taken last week while she was cruising in Singapore.

Despite the no-photo policy, Fincantieri was permitted to release some details about the complex project. Her 459-foot (140-meter) LOA puts the long build time into perspective. Ocean Victory features some impressive relaxation spaces, including an observation room deep in the hull. This lets the owners and guests see sea life swim right by. If guests aboard Ocean Victory would rather take in the sights, there are a few tenders. The primary one can drive right into its tender bay. After a day of vigorous watersports, there’s a spa to indulge in, too. It encompasses more than 3,229 square feet (300 square meters). If Ocean Victory is anchored in a remote location, the helicopter that’s stowed in an onboard hangar can whisk the owners to the nearest airport. The hangar is concealed below decks, with the helipad rising to deck level when the whirlybird is wanted.

Ocean Victory resulted from a collaboration with Espen Øino for styling and Alberto Pinto for the interiors. Unfortunately, details on other accommodations and the decor have not been revealed.