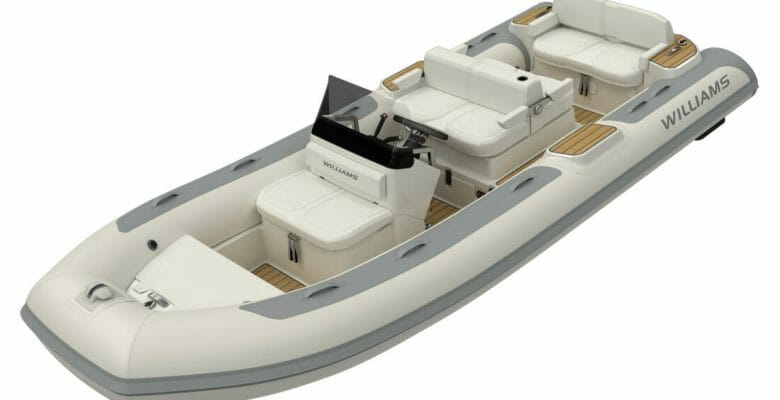 Just because something is popular doesn’t mean it can’t still receive improvements. Williams Jet Tenders has taken this approach with two of its DieselJet RIB models, the DieselJet 445 and DieselJet 505.

Overall, the series to which the two models belong targets owners and crew of megayachts measuring 82 feet (25 meters) and larger. They therefore can carry more than a handful of guests and a crewmember at the helm. Specifically, the 445 accommodates seven guests, while the 505 (above) can carry eight. Both figures are one passenger higher than before, in fact. They each gained an extra seat tucked into the bow, thanks to the helm shifting slightly aft.

The redesign involves more function, too, as well as aesthetics. The DieselJet 445 (14’9”, or 4.5 meters) looks sleeker, for example, thanks to slash-cut tubes. The seating, meanwhile, features a new contoured look, plus Silvertex vinyl-covered fabric, which holds up to the marine environment. It’s simple to clean, too. The redesigned seating also includes an integrated boarding pole in the helm backrest—providing something handy to grab when stepping in or out.  Along those same lines, the now-larger swim platform has a single lateral grabrail for the convenience of swimmers using the swim ladder.

The DieselJet 505 (16’5”, or 5.03 meters) has a similarly larger swim platform with the same grabrail. She, too, has slash-cut tubes for aesthetics, but also for fore and aft stability while running. Just like the 445, the DieselJet 505 features Silvertex fabric on all seating. For your crew’s convenience, both the 505 and 445 have a multi-function Raymarine Axiom 7 display within the reconfigured helm. They further get dedicated stowage to each side of the screen. Finally, note that while the DieselJet 505 is available with customizable colors for her molding and seating, she additionally can come with full SOLAS certification.

Getting to and from shore is still just as quick and fun. Both RIBs boast a top speed just shy of 35 knots.

Look for these new DieselJets at the Cannes Yachting Festival next month.