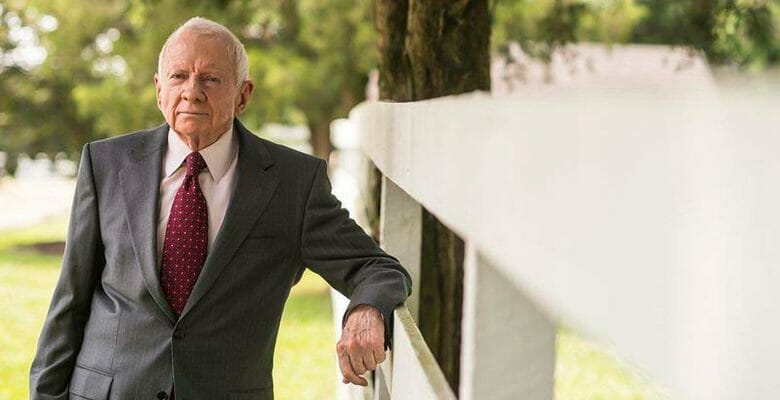 Robert T. Healey Sr., a.k.a. Bob Healey Sr., who with his brother Bill established Viking Yachts in 1964 and made it into the world’s largest sportfisherman builder, died on December 9. He was 92 years old.

“My father was a true leader, and his vision will always guide us,” says Bob Healey, Jr., co-chairman of the Viking Group, which manages the shipyard. “He believed that the people around him—his family, friends, and employees—lifted him to success, and it was his obligation to leave the world a better place.”

Born in 1929 in Atlantic City, and raised in southern New Jersey, Healey Sr. went to college in Philadelphia. Notably, he earned a degree in political science, going on to the University of  Pennsylvania Law School. He practiced law in Camden County in New Jersey for 25 years, retiring as a senior partner of a law firm. However, his working days weren’t over. He branched out into real-estate development, with his brother Bill (at right, below) joining him in the 1950s. One particular property changed their trajectory forever.

In 1964, Peterson-Viking, a small wooden boatbuilder in New Gretna, New Jersey, was struggling. The Healeys had already acquired the adjacent Bass River Marina and agreed to buy the boat shop. They changed the name to Viking Yachts and moved operations next door. Boatbuilding soon became such a big part of their business that they sold the marina and focused solely on Viking. Healey Sr. served as chief executive, the corporate lawyer, and the financial chief. Bill Healey, meanwhile, oversaw production. Under their guidance, Viking Yachts delivered more than 5,000 boats pushing up into megayacht territory.

Equally, if not more, significant, Healey Sr. led the fight against the federal luxury tax that took effect in 1991. It levied a 10-percent tax on all boats exceeding $100,000, among other so-called luxury items. It caused far more harm than good. Specifically, the tax yielded just $12.655 million in its first year–$97 million less than expected, since consumers bought lower-ticket items or withheld discretionary spending. It especially hit boatbuilders hard, with a 77-percent plunge in sales the first year alone. Businesses closed and massive layoffs resulted, too, with Viking letting go all but 65 of its 1,500 employees. In fact, Viking nearly went bankrupt. Healey Sr. helped organize a national, grassroots campaign to repeal the tax. Speak with industry veterans, and some will tell you stories of boarding buses to Capitol Hill. Bi-partisan support led to the repeal in 1993.

“He saved not only Viking, but the entire marine industry,” says Pat Healey, Viking’s current president and Bill Healey’s son. “He wouldn’t take ‘no’ for an answer.” In fact, Pat Healey continues, “he was a brilliant lawyer and savvy businessman who was able to convince the politicians in Washington that this was very much a jobs issue.” Furthermore, Healey Sr. funded Viking out of his own pocket, with some help from Bill. By the time the tax repeal took effect, Viking was able to build new models.

Healey Sr. served as Viking’s chairman of the board for 57 years. Additionally, in 1996 he and Bill established the Recreational Fishing Alliance, a non-profit promoting sustainable fisheries and a healthy marine environment. That same year, the brothers created Viking Sport Cruisers as the U.S. brand name and importer of Princess Yachts. The National Marine Manufacturers Association inducted the brothers into its Hall of Fame in 2003—one year after the re-acquisition, coincidentally, of the Bass River Marina. (It’s now the Viking Yachting Center.) Healey Sr. was philanthropically minded as well, building schools in Mexico and establishing a relief foundation delivering medicine and water and providing housing and education to Sierra Leone villages. Plus, he and his wife founded an equestrian program for at-risk youth.

Healey Sr. is survived by his brother, his wife Ellen, seven children, 16 grandchildren, and further nieces and nephews.