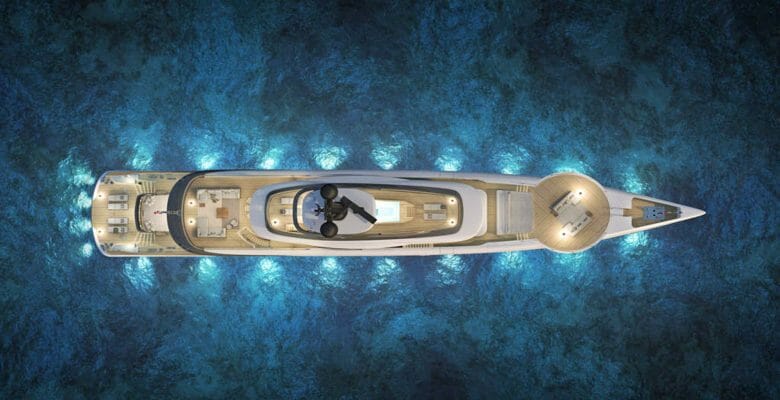 The end of 2021 was positive for The Italian Sea Group, with the shipyard signing a contract for a new 55-meter S-Force model from its Admiral Yachts division.

The 180-footer is an all-aluminum design, part of a series that includes deliveries like Geco. Therefore, all exterior styling, which is quite sporty, and interior layout are from the shipyard’s own staff. The megayacht includes three decks and accommodates 12 people in the owners’ party, along with 11 crewmembers. That makes for an enviable guest-to-crew ratio.

While some of the things the owners of this S-Force megayacht wanted are similar to many owners’ desires, they brought some unusual requests to the table, too. For example, the six staterooms are pretty traditional in the fact that they include a VIP and four guest cabins, along with a generous master suite. However, and unexpectedly, the yacht’s beach club is open-air, additionally with glass walls to each side. The concept is to allow for nearly uninterrupted views to three sides, yet to protect everyone on windy days. Another nice touch here is a built-in swim ladder.

The owners of this S-Force are aiming for a soothing, relaxing ambience inside. It starts on the upper deck, for instance, with a sliding-glass door essentially eliminating barriers between the lounge inside and the alfresco dining and lounging areas. Additionally, calming, soft colors like light blue are adorning a variety of rooms inside. The shipyard has not named an interior designer; regardless, it does say overall that shapes will follow a minimalistic approach, and finishes will be luxurious yet discrete.

The megayacht, with a custom hot tub on the sundeck and a touch-and-go helipad, should be handed over in 2023.