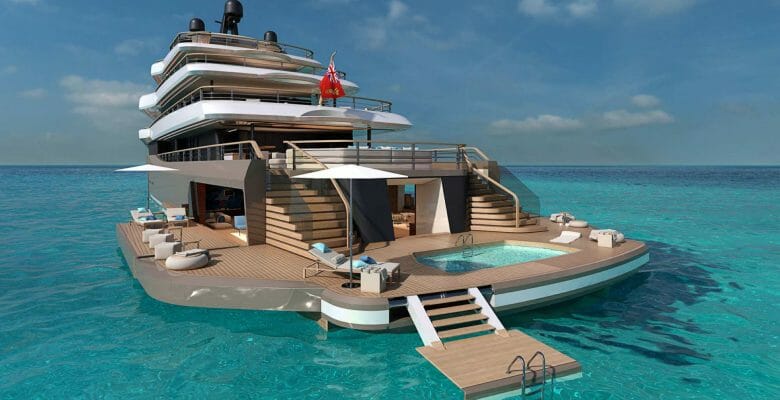 UPDATE, AUGUST 31, 2022: The keel-laying ceremony for Moonflower 72 took place this month at Porto Marghera in Venice, Italy (below). Although it seems an unusual choice for construction, Marcello Maggi, Wider’s president and co-owner, says it’s ideal. “This district contains all the characteristics we were looking for: on the one hand, sustainable spaces and strong skills matured over decades of activity in metal working; on the other hand, the cultural and artistic allure of Venice.” On a related note, Wider intends to start further yacht construction in Fano, Italy. Moonflower 72 should see delivery in 2025.

A meeting of the minds in early 2021 between Wider Yachts and Nauta Design led to a contract signing this past January for the Moonflower 72. This week, the superyacht started construction. Mario Pedol of Nauta Yachts considers the shipyard “the right cocktail of technology and team organization to make the project a reality.”

The meeting of the minds came from Pedol, Nauta Design’s co-founder, and Marcello Maggi, Wider’s president. In sharing their respective projects and future plans, Pedol realized Wider might suit a new project for his studio. Specifically, a client wanted to build a megayacht in the 230-foot (70-meter) range. Shortly thereafter, Nauta Design sent the details to Wider. The owner signed a letter of intent with Wider and Nauta Design in September 2021. The contract came three months later.

Among the reasons the client chose the shipyard: a strong focus on hybrid propulsion. Wider Yachts made hybrid propulsion standard equipment on its projects like Cecilia, the first Wider 165. It occured long before most builders installed their first application, too. The Moonflower 72 will combine 1,860-kW variable-speed gensets with a sodium-nickel battery bank providing about 1 megawatt of energy. Additionally, the shipyard is installing waste-heat recovery systems. It’s further using artificial intelligence to “learn” how the owners, guests, and crew use energy-consuming amenities and adjust efficiency accordingly.

Nauta Design, which is responsible for naval architecture, styling, and interior design, is incorporating its famous features, too. Notably, the Moonflower 72 will have The Island, its patented system of fold-down bulwarks. They create a seamless, spacious walk-around area at the beach-club level. Aboard the Moonflower 72, it further includes a pool, as seen at top.

No additional details are available at this point about the project. Though, Maggi says “We’ve invested heavily in restructuring the shipyard in anticipation of orders like this one.”