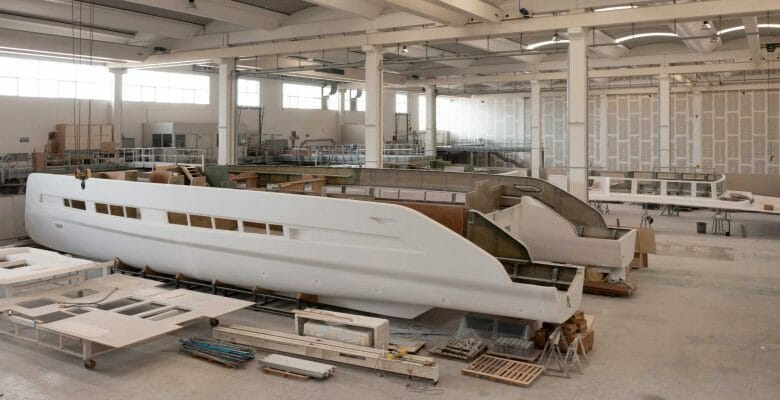 When Silent Yachts started promoting its vision of a solar-powered future for yachting a few years ago, it partnered with an existing shipyard to bring its first launches to the water. Since that time, the management team has broadened its reach. Therefore, its Austria-based owning company, Silent Group, has acquired full rights to a shipyard in Italy.

The shipyard, in Fano (below), is familiar to the team. Currently, it’s building and outfitting the latest megayacht catamaran in the Silent 80 series (above). The yacht will have an array of solar panels feeding electric motors to propel her through the water. Naturally, she’ll also have creature comforts large-yacht owners want, like alfresco seating/dining and welcoming lounges inside.

Silent Yachts will use the Fano facility for the smaller Silent 60 series, too. Its electric Silent Tenders line will see construction in yet another of the halls. Overall, five construction sheds comprise the shipyard, totaling 236,806 square feet (22,000 square meters). Further similar square footage is available outside. Yet another advantage, according to the management team, is a research and development department.

Since Fano is home to other yacht builders, the projects can take advantage of several subcontractors and suppliers nearby. Notably, the brand intends to employ about 250 people this year, a mix of independent contractors and direct employees. “Our acquisition of the facility in Fano is a great opportunity for the city and for the nautical sector in the area,” says Michael Köhler, the CEO.

Köhler sees more opportunities, too. “We have expansion plans already under discussion to increase the production capacity of our sites and acquire new ones,” he says. He adds that the management team is open to doing so locally or elsewhere in Italy. Regardless, expansion will support Silent Yachts’ intention to offer solar-powered catamarans to 120 feet (35.76 meters).