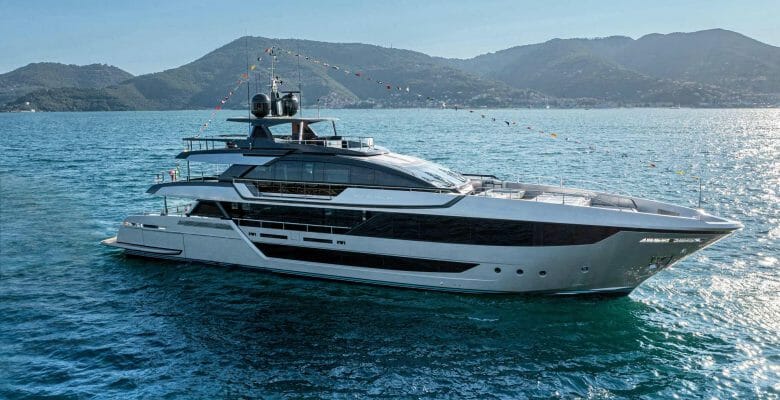 One hundred thirty-one feet (40 meters) of relaxation launched in La Spezia, Italy, this month, set to head to U.S. shores. Hull number one of the Riva 130 Bellissima not only represents the brand’s flagship, but also its first true trideck.

Riva, which revealed the news in February, collaborated with longtime design partners Mauro Micheli and Sergio Beretta of Officina Italiana Design. The studio, of course, has designed every Riva yacht and megayacht dating back nearly 30 years. She features hallmarks of Riva style, including a curving superstructure and visible carbon fiber. Also note how a black line runs horizontally along the hull, calling attention to her large ports there, then rises up. Additionally, nods to car design appear, such as large air-intake grills and the just-mentioned carbon fiber.

Being a Riva, rosewood plays a role aboard the 130 Bellissima, too, throughout the interior. But, because she’s a trideck, she follows in the footsteps of what large-yacht buyers want. For instance, since so many owners and guests are accustomed to beach clubs, she has one. But, it’s more open, meant further to be part of an overall aft alfresco living area with the main aft deck. The two together encompass more than 646 square feet (60 square meters) of usable space. Also, the beach club is dedicated to lounging and conversations due to a separate tender garage forward. Specifically, the owner of this 130 Bellissima will stow s a SeaBob, a PWC, and a guest tender here.

Alfresco dining is sure to be popular aboard, given the dining area for 10 on the upper deck. Guests can enjoy pre- and post-dinner cocktails one level above as well, on the 130 Bellissima’s sundeck.

When the owner wants some privacy, the full-beam (26-foot/8-meter) master suite is the place to be. (Four guest staterooms are all below decks.) He can even enjoy some private time outside, especially with a sunpad toward the bow.

Like her smaller sisters, the 130 Bellissima should boast a strong turn of speed. The shipyard expects sea trials to confirm a 26-knot max end and 23-knot cruising speed. Power comes from twin MTUs.