Home / Yachts / The Yacht Athos as You’ve Never Seen Her Before, Fresh From Rebuild 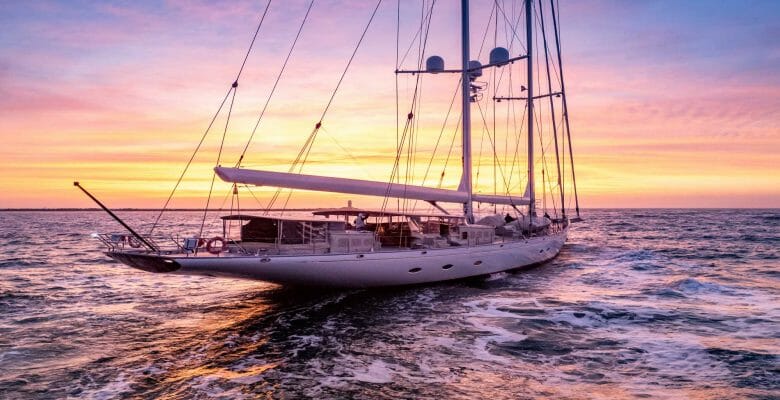 For more than a year, the yacht Athos has been at Royal Huisman’s Huisfit facility in Amsterdam, undergoing major modifications. Now back in her owner’s hands, the 12-year-old superyacht schooner has extensively re-imagined spaces, including entirely new structures and usable areas for guests and crew inside and out.

Surprisingly, the current owner had chartered the 203-foot (62-meter) for a full year before buying her. (The yacht saw construction at the now-defunct Holland Jachtbouw, whose facility Royal Huisman turned into its Huisfit location in Amsterdam in 2019.) Athos is no strange to extensive cruising, having completed a circumnavigation over several years starting around 2014. The time onboard didn’t just confirm his desire to acquire her, but also helped shed light on things he’d do differently. Upon her arrival at Huisfit in September 2021, the yacht had a pretty detailed to-do list—which grew to be a reconstruction and addition list keeping craftspeople occupied through recent weeks.

For instance, among the first things that the yacht Athos gained is an extended stern overhang. Four feet (1.25 meters) longer, it boasts curves and a teak transom blending into the overall aluminum hull, from the drawing boards of Hoek Design. The same studio provided the original naval architecture, too. Restyling and lengthening the stern allows for a 6’6” (2-meter) sunning space aft of the private owner’s cockpit. The cockpit itself, meanwhile, gained a new layout and the addition of a refrigerator and icemaker. These complement a new layout and furnishings inside the owner’s deckhouse.

Speaking of deckhouses, an entirely new deckhouse is aboard Athos. She already had two, gaining a third forward as a crew-centric area. The owner’s team created extra social space for them and an extra nav area, replacing the former crew access to the crew’s quarters. The crew still has access to their cabins in here, of course. Further benefits of the new deckhouse: engine-room ventilation and lower related sound.

While Hoek Design is responsible for the majority of the design changes, including interior areas, Peter Mikic Interiors contributed, too. It handled the layout and styling of the main deckhouse and the guest interior decor. The main deckhouse and cockpit underwent comprehensive changes. For instance, the cockpit is wider and longer, permitting dining for 12 plus smaller, cozier areas for relaxation. Coffee tables convert to dining tables when wanted. Upon entering the deckhouse, guests will notice a naturally brighter ambience, plus a one-level floor. There’s also a sense of much more space. Among the new amenities in its entirely new layout: a bar to port, a settee where the nav station was (it’s still there, just relocated), and more intimate dining tables and seating areas.

Guests will also appreciate how the yacht Athos provides them with even nicer staterooms. The aft cabin to port particularly is noteworthy, having gained more space from the elimination of a dayhead. The dayhead sat between here and the owner’s suite just aft. Instead of wood paneling, each stateroom has fabric walls. Every inch of space from the staterooms to the foyer (which has a new chandelier, too) and to the stairway is different. The stairs, in fact, are straighter, saving space from the previously curving staircase.

From eliminating a fireplace in the lower saloon and creating a media room out of some of the space to adding a stewardess station for the galley and adding two new ports in the owner’s suite, the yacht Athos has a new lease on life.