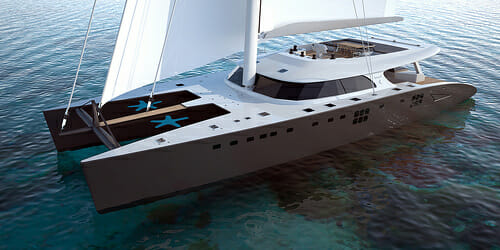 Just a few months after beginning construction on its first megayacht, the 102 Double Deck, Sunreef Yachts has signed an order for another new mega-size catamaran, the Sunreef 114 Sailing.

Depicted above, the yacht will measure 106 feet LOA, representing Sunreef’s largest to date. Also of note: This project reportedly makes Sunreef the only shipyard with two multihulls measuring more than 100 feet LOA under construction. 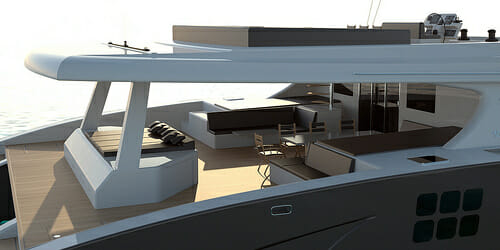 The 114 Sailing was commissioned by a European client who liked the 100-foot Double Deck’s overall design but wanted a bit more room. As a result, the yacht will have a nearly 40-foot beam. That should make the alfresco spaces, like the lounges and seating areas seen above, plenty comfortable. The use of teak decking both inside and out, such as at the helm perched atop the yacht (below), should also make the overall feel more comfortable. 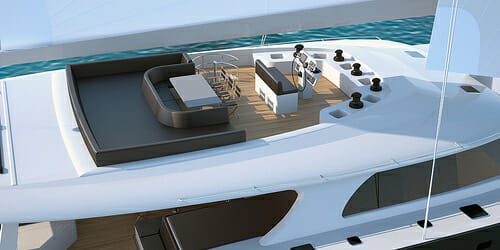 Though no renderings have been released of the interior, the owner and Sunreef’s in-house design team are closely collaborating on some interesting twists on its layout, particularly in the galley and saloon. Instead of being designed as separate rooms, they’ll be open to one another, with an island of cabinetry serving as the divider. On the saloon side, the island will contain a 40-inch LCD television, DVD player, and stereo. On the galley side, it will feature the microwave, oven, and dishwasher.

The 114 Sailing’s aluminum hull, which is being built upside-down as per tradition, should be flipped toward the end of February. In the meantime, the Sunreef 102 Double Deck is continuing to make progress. Her aluminum superstructure is complete, and interior joinery fit-out is underway.